Andy Slavitt @ 🏡
@ASlavitt
March 24 COVID Update: Based on calls with the WH, the Senate, testing companies, hospitals in Seattle, and people who have launched new capabilities.

Also much talk about avoiding too early an end to #StayHome without tanking the economy.1/
Let me start with the testing situation. Why does S Korea have so many available tests & we don’t? What’s the hold up? That was the first half of my day. 2/
The vast majority of tests come from big commercial labs. 5000/day is a big lab. There are also smaller labs, state labs & hospital labs who make tests mostly for their employees.

The CDC is now saying only front-line health care workers & first responders shod gets tests. 3/
The commercial labs have increased from about 8000 to 50000/day. And if you add the non-commercial, maybe that’s 60,000?

Progress, but if we want to test anyone with symptoms & test them before & after, that’s way short for a virus doubling every 3 days. 4/ 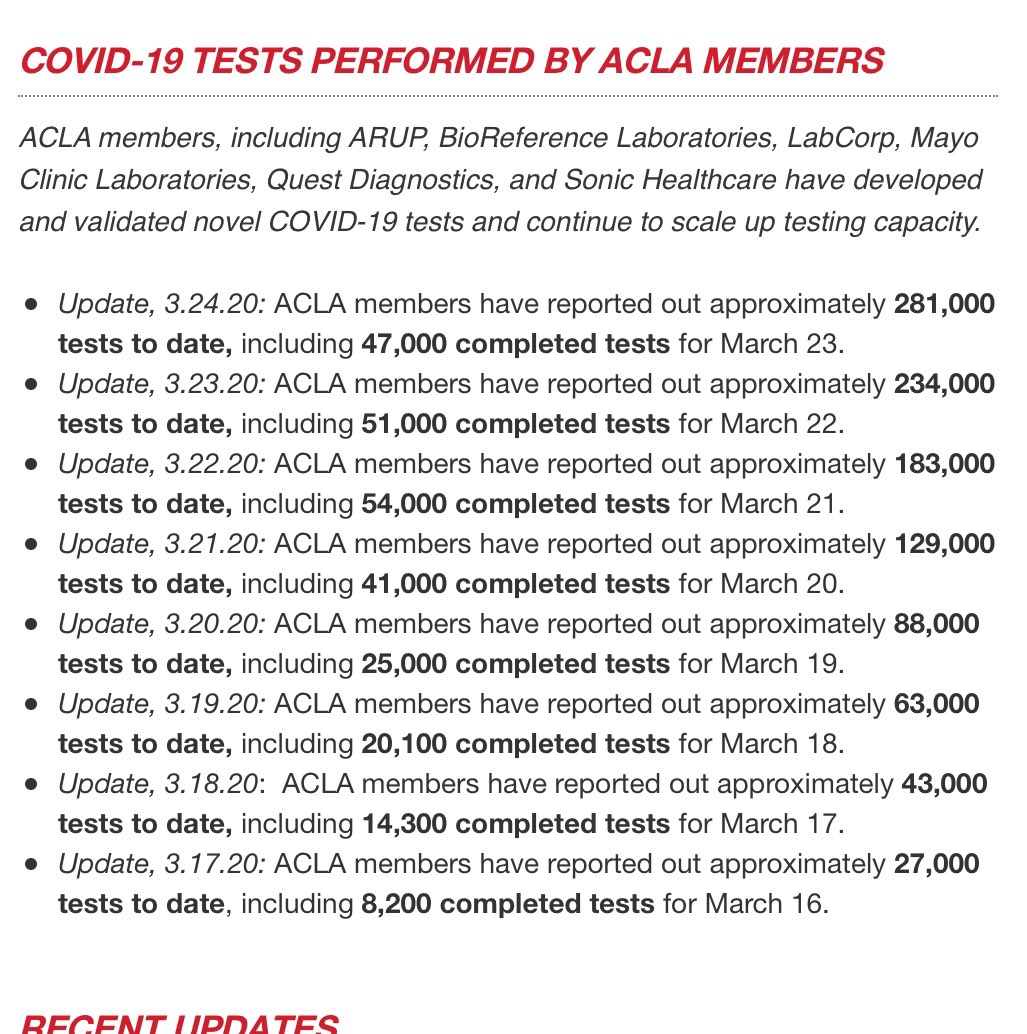 To answer why I had to go deep. 5/
People throw all kinds of numbers around. Number of kits, number of tests, produced, administered. Makes it easy to spin what you want.

The truth is CDC could have gotten started earlier & done better but here we are. 6/
There’s a shortage of swabs and reagents for test kits. But apparently the labs say they are getting more of those in. What’s constraining them are the giant “Liquid Handling Robots.”

(I suspected we were all in a horror film & the presence of robots confirms it.) 7/
The biggest maker of these robots is a company called Roche. Their monster robot is called the 6800. It can process the most tests.

But before you start doing all kinds of math, only 110 are in the US. I think but don’t know that most are the smaller. 9/
Interrupted by a call from an scientist Will disclose who if he allows me to. But give me 15 mins. 10/
I’m back and I feel dumber than ever. The person I was talking to was the exact opposite of dumb (that’s a clue). 11/
So we won’t have all the tests we want unless we create some different tests. Cepheid.com was just given emergency approval. Test can be given in pharmacies & doctor offices. Will try to find out tomorrow how much volume they can do. /12

cepheid.com/?gclid=CjwKCAj…
Congress I’m it’s bill is deciding how to pay for those tests. My suggestion to both sides is to pay for it the same as we paid for the Zika test. $52 at a minimum. And then deploy the DAMN Defense Production Act already. We will have more tests that way which is the goal. /13
The controversy was Republican Senators didn’t want to pay a rate that had the word Medicare in it.

Speaking of Congress. Lots of time between drafts but at the minute the Republican draft just came over to Democrats. But they’re close. /14
Small business payroll loans if there are no layoffs. More support for individuals in checks and unemployment. They need to work in the night to get things done. /15
Senators on at least some committees have been briefed that the COVID-19 death toll is expected to be between 1.7 million and 2.2 million. The biggest reason I will cover now. /16
As we know Trump has said they are taking steps to “open up” the country.

If people did, the reason will be because of the number one risk factor: age? No. Pre-existing illness? No.

Number one risk factor right now is no access to an ICU bed or ventilator. /17
That brings me to my conv with a very large hospital system in Wash state. They have now been at this for 2 months. Here’s what they had to say. I’m just going to list the chronology.

1- They got ready
2- They tried to push ppl to outpatient
3- They built surge capacity /19
4- they turned on telemedicine
5- they were told by CDC to start testing the population
6- then the shit hit the fan /20
7- no more tests
8- N-95, swabs, 4 million masks short
9- need 100s of millions 21/
Amazing that staff shows up every day. Lots of fear. Mental health support. They talk to White House, Congress, and CDC daily, but see no hope.

They fear the president saying he wants to end social distancing. It’s the only thing keeping them going. 22/
So the question is what does Trump need to do? What do governors need to do?

Buy the health care workers time.
Buy the scientists time.
Get better surveillance on the population.
Fund the states & low income ppl in the meantime 23/
The scientist I was speaking to and several others, along with homeland security risk managers and I, are meeting (virtually) to talk about how to prevent the Easter Massacre.

Here’s a preview...24/
By Easter Sunday, when Trump thinks he will be able to open the economy, we will be in the midst of the worst of it. With the numbers we see and the images on TV, doubtful.

What we need to be able to tell the president is what conditions should be before we change anything.25/
If we open up again, look at Hong Kong. They were fine, opened, and created a problem. It’s not an economic tradeoff. No economy can withstand what scientists believe will come as our hospitals get overrun.26/
Right now the smartest people I talk to want us to push R0 to zero, and be able to contract trace, install thermal indicators, reliable anti-body testing, and out fever tents in the right place.

Armchair experts and economic hacks feel different.27/
Many people gave me cool things to put in the thread tonight. But this is too long. And the situation is serious. I appreciate people pulling together but if we don’t socially isolate, we will regret it forever.

One more thing...29/
Increasingly more of us know people effected by the virus. I’m thinking of all of you and all of them.

A good friend, 52, younger than me, in good health, is in the hospital. Bad pneumonia like symptoms, declining oxygen levels. Whoever infected him will never know they did./end