Andy Slavitt @ 🏡
@ASlavitt
COVID Update March 30: Tonight’s update is going get to the heart of how Trump decided to make the leap to start discussing the potential US death toll from Coronavirus.

I talked to Italy, the White House, US hospitals and others about what they see and what they expect. 1/
No one in their right minds will want to go through what we’re about to go through the next few months. 2/
This is such a sensitive topic. 1 death from this virus is too many. Numbers fly around as if they’re not attached to lives. People want predictions, but they don’t like what they hear. Big numbers scare people & yet they motivate people. And we need to plan for it to beat it.3/
So I will discuss what I’m hearing, but I don’t make predictions. And we all have a lot to say about how many people lose their lives. That’s why people must #StayHome to reduce the spread. So the estimate of loss of life are a big range.4/
Trump yesterday at his news conference for the 1st time began to talk about 100,000 to 200,000 casualties. He mentioned that the number without action would be 2.2 million.

60,000 Americans died in Vietnam. 620,000 in the Civil War. 1.2 million in all American wars.5/
I got some insight into how Trump decided to make the announcement of a projected death toll. I don’t know the order of events but at the beginning of last week, he was ar “let’s open by Easter” & “the medicine is worse than the disease.” But he changed by the end of the week.6/
Why? A lot of us (take us to mean anybody who had studied the data and were considered to have expertise or experience here) were very worried. Rash, impulsive, impatient, feel-good thinking was not what we needed. 7/
It was only about a month ago after all that he projected we will be at zero cases, and has slowly lagged the reality only as events on the ground forced him. 8/
We are paying the price for the on the job training presidency.

Ore importantly now, his supporters which have been misled should take themselves out of harm’s way. 9/
As the week went on a few things caused Trump to evolve his view. His economic team was slowly swayed by Birx and Fauci. Some people have told me they believe Birx had gone to the dark side when she praised Trump for his focusing on the science.

I never believed that. 10/
I think Birx was doing what she knew she had to do. Demonstrate loyalty to Trump so he would listen to her. I think she and Fauci played the long game.

Unpopular view maybe. But it’s how everyone who is successful with him learns to do it. 11/
The data and the images were becoming too overwhelming. The lag time of already confirmed cases alone could easily be extrapolated to hospitalizations and deaths.

Really good analyses and recommendations like this one were put together. twitter.com/scottgottliebm… 12/
But something else happened. A Queens hospital on TV near where Trump grew up and a friend of his in a coma recast everything as real for him. All of the sudden the economists folded. 13/
If you listen closely, you will hear Trump say 100,000 is the number and you will hear Birx and Fauci say 100,000 to 200,000 if we are lucky.

Numbers floating around the White House are 400,000 and some think that requires some optimism. 14/
I’m going to pause here to reload some more tweets and talk about what those numbers depend on and what we need to do. 15/
You will hear numbers higher than this. And indeed I would be surprised if Trump 2 weeks by 2 weeks and 100,000 lives by 100,000 lives adjusts both his and our own expectations.

Every realization he comes to late costs us so dearly in our loved ones & friends. 16/
The biggest controllable factors:
-Speed, length and commitment to strict isolation
-Strong protections for seniors, highest risk people
-Front line worker protection
-The race to therapies & testing
-National command & control 17/
Do we know how much strict isolation #StayHome measures work? Well, we have gone through this before. Remember?

18/
Starting late turns out to be costly. Trump’s extra week to learn will be expensive.

Liberty University new mascot will be the Super Spreader. Falwell’s photo should be on county lines everywhere.

Philadelphia’s extra week in 1918 to socially distance hit it hard.19/ 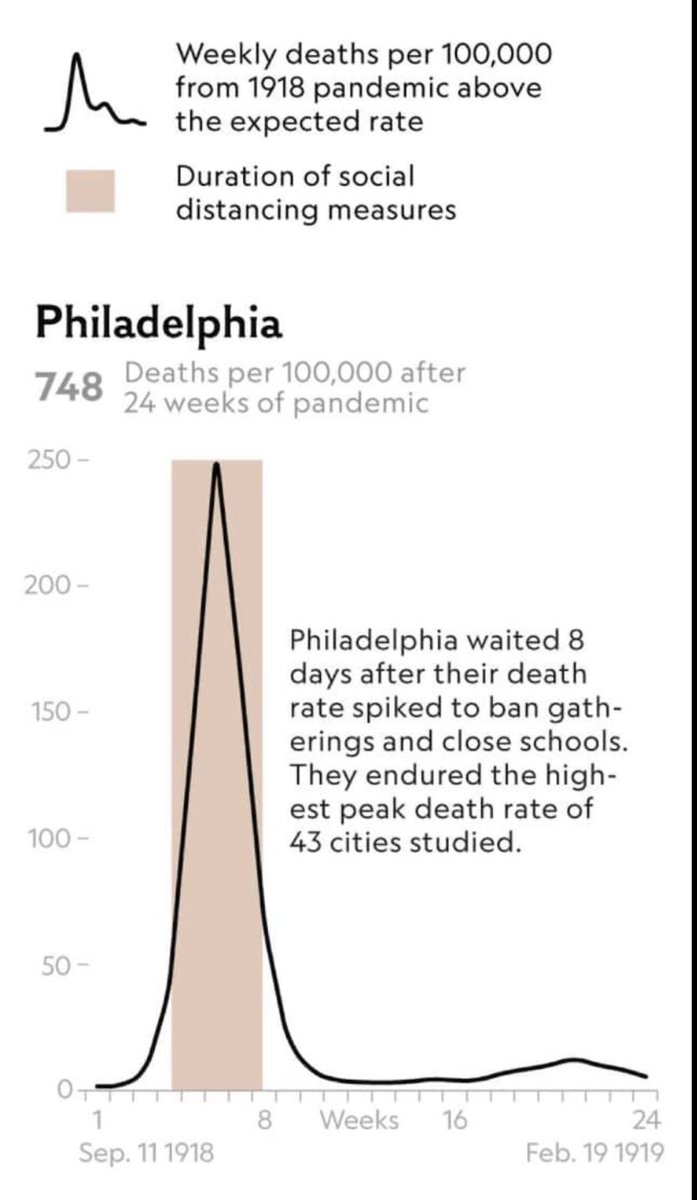 Starting early is the name of the game. Santa Clara got religion after an early death. Seattle’s government leadership brought R0 from 2.5 to 1.4 or so. 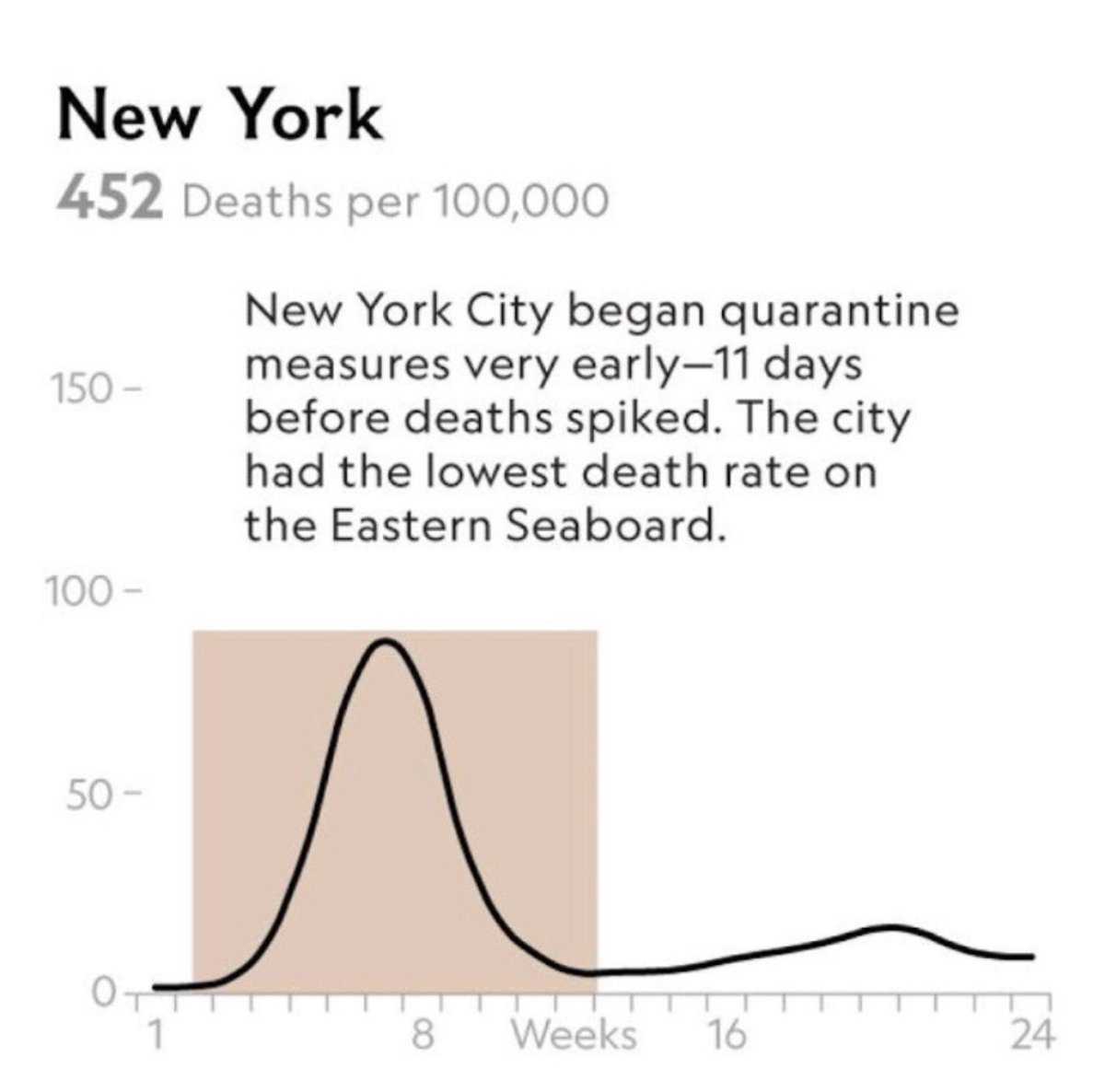 Most important. You can start early but you can’t let up to early. This is our biggest risk. Because it’s hard.

San Francisco saw its death rate improve & decided things were better. It is so easy to see Trump declaring victory too early. It’s a trap. 21/ 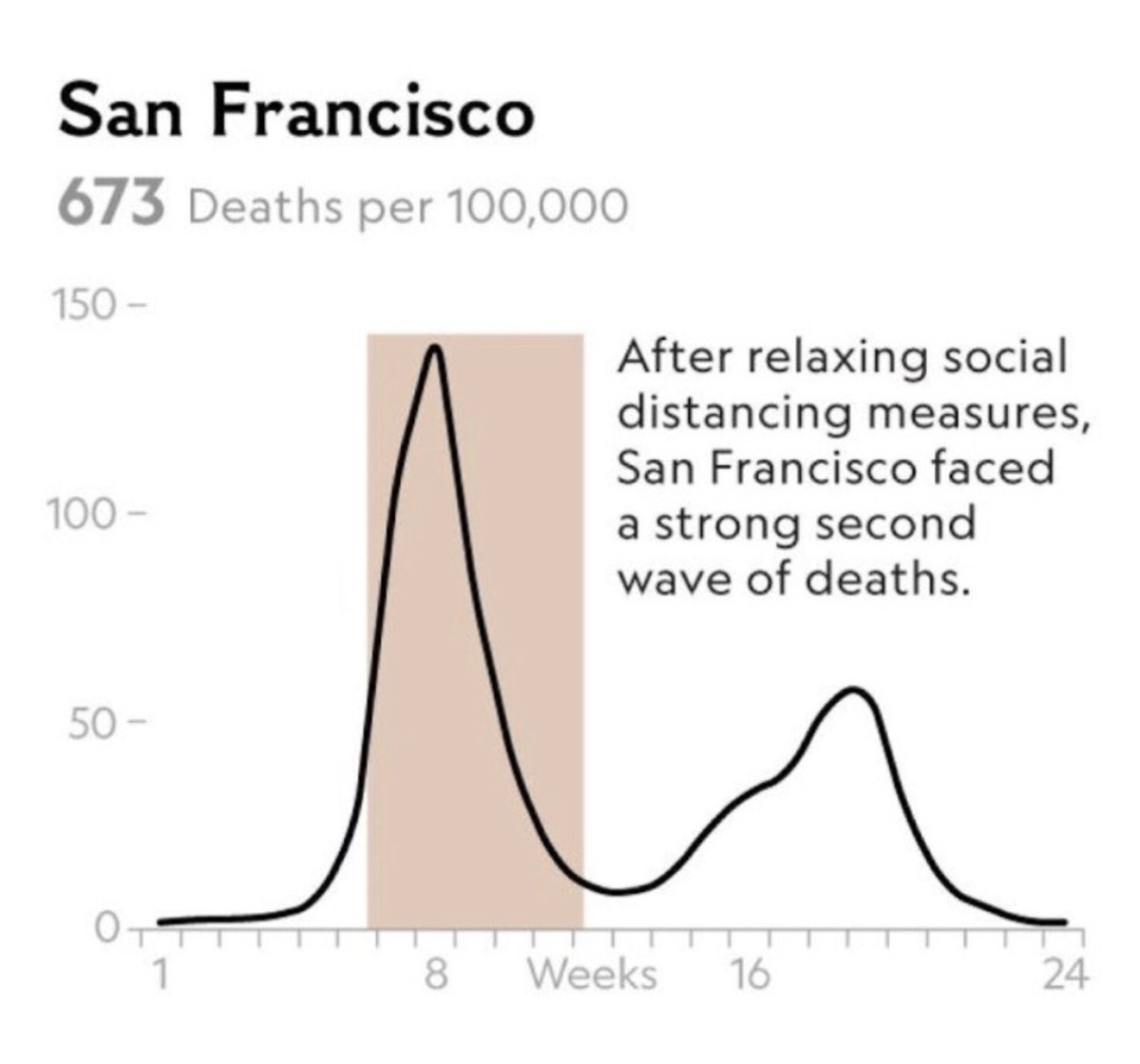 Early and often lowered the death rate consistently in 1918. 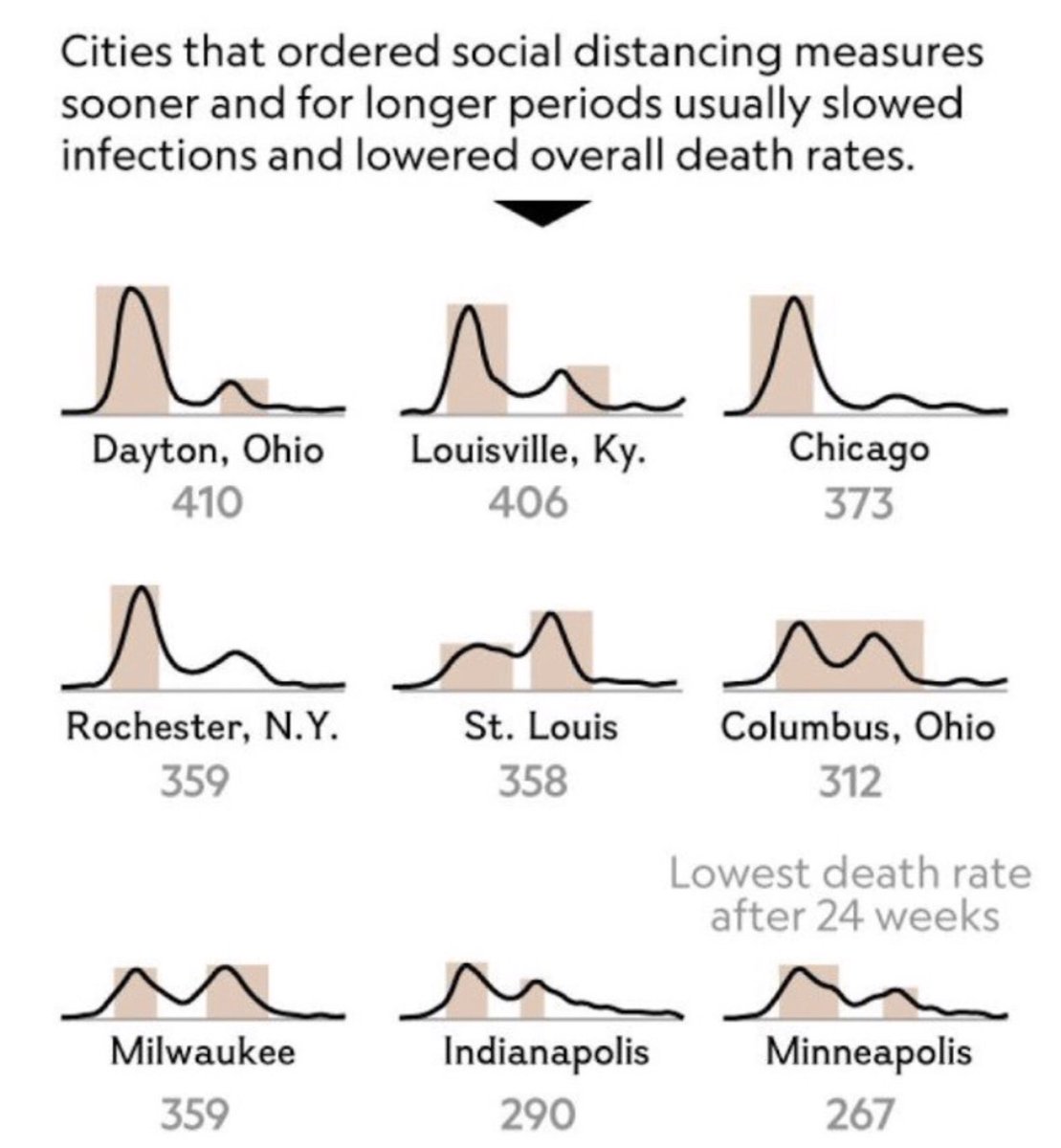 Forget the numbers— they’re too numbing & more things can be done to lower them. And focus on how much we can control.23/ 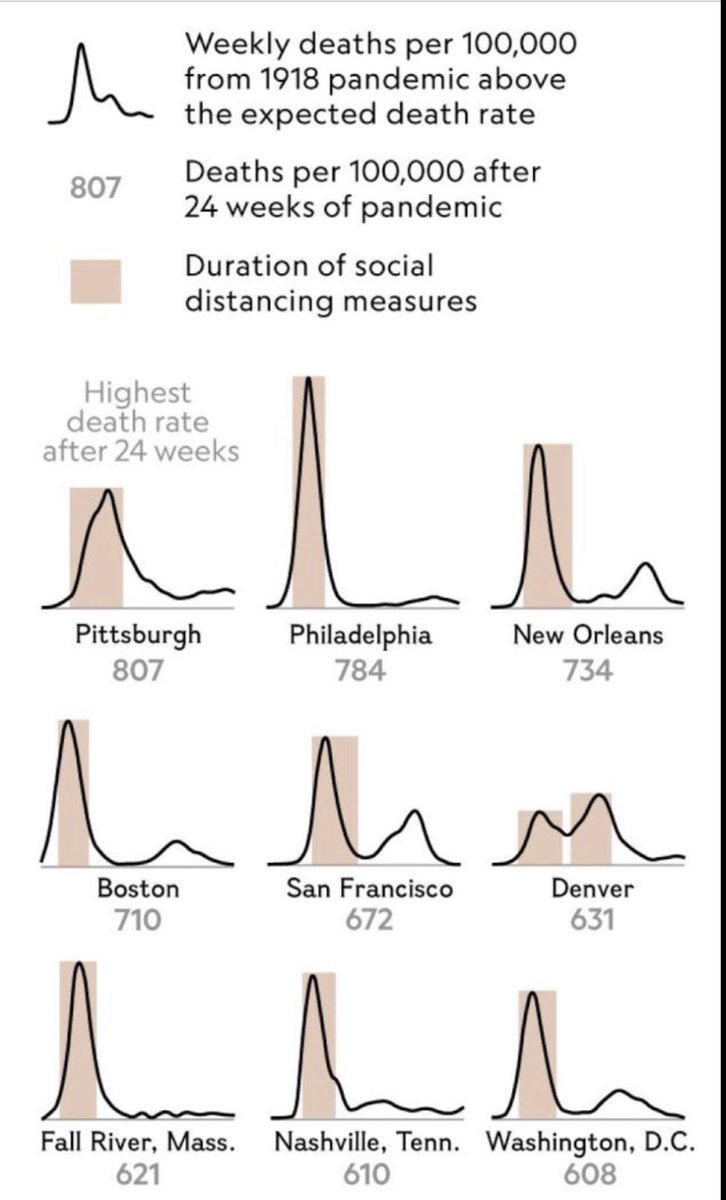 Here I want to call out someone. Weeks ago, when a group of us rolled out the #StayHome campaign, when the country was far from its thinking today, one anonymous donor paid to run this campaign in New Orleans & Florida. The govt wouldn’t coordinate & with his help, we did. TY.24/
What more can be done? We don’t talk enough about how to keep this out of nursing homes & away from dense populations, poor communities, multi-gen households.

We need a strategy there. A NATIONAL strategy. 25/
One of the reasons the death counts are higher for cities that start later is there aren’t enough hospital beds, PPE, ventilators, nurses, or doctors to keep people alive.

We can’t care for people in hallways. 26/
The hoarding & profiteering of PPE that is meant for our workers is akin to manslaughter.

I guess I have some anger built up & I decided it’s worth an extra hour of my day every day to bring these people down. And awareness, complicity & benign ignorance doesn’t hunt. 27/
Therapies. Early detection. Testing. It’s been the subject of these threads so often for a reason. Not because I know science. But because our scientists, our computing power, our ingenuity, our labs, our tech cos can prevent COVID-19 & make it survivable.28/
The people in Italy I spoke to are us 2 weeks earlier. We discussed the humane policies for handling overcrowding. A friend’s daughter was asked to put these policies together...in Florida.

The mistakes of our leaders have never been costlier.29/
April, May, June, I don’t know how we prepare ourselves for what we will see. What we will experience. What we will feel. What I’ve seen already has already singed into my memory. And I’m nowhere near the front lines.

But if we do the right things, we will save lives.30/
Tomorrow I am going to speak to the last item I mentioned and what I have been recommending to the Trump Administration: we must nationalize our response. We must militarize our response. We must stop being a week or more late & start saving every life. 31/
I know some of you have already lost someone to COVID-19. Or are deeply worried about someone. This was all very difficult to write. Words on a website are inadequate. I am sorry if anything you read was too cold, too insensitive. And I am so sorry for anyone’s pain. 32/
This is why my 18 year old Zach suggested we start a podcast together. To talk through this together.

So subscribe, listen to the trailer. Our first interview was today & first episode is Wednesday. Be well, let’s get through this.end/