The issue at the hearing was whether Manafort reneged on his plea deal by lying to the Office of the Special Counsel (OSC).
1/ I am going to assume that what OSC says is true. Of all info sources available to us now, it seems to me the OSC is most likely to be accurate.

So basically we're doing a puzzle with 1/3 of the pieces.
2/ First allegation: Manafort lied about the frequency of his contacts with Kilimnik.

“It” was really bad. Here’s how we know: 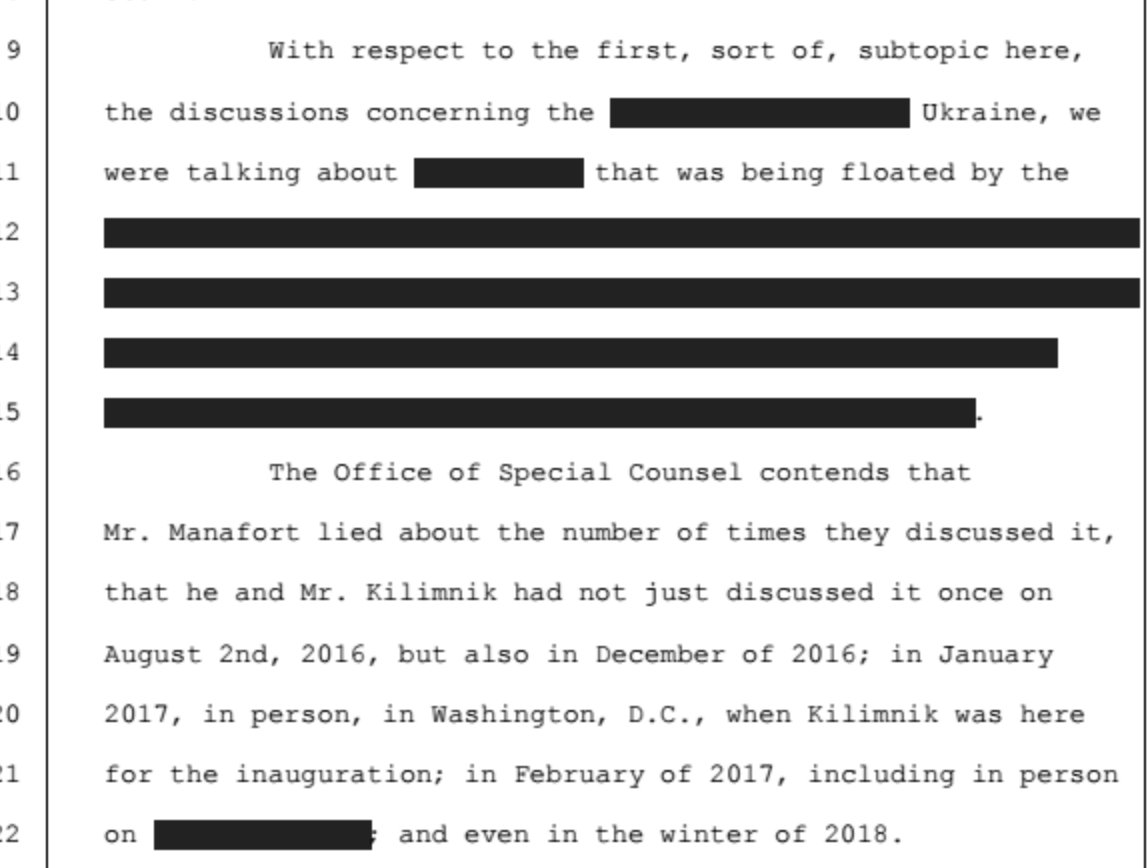 [IOW, “it” was so bad that Manafort wouldn’t even consider it.🙄]

Manafort then kept changing his story. 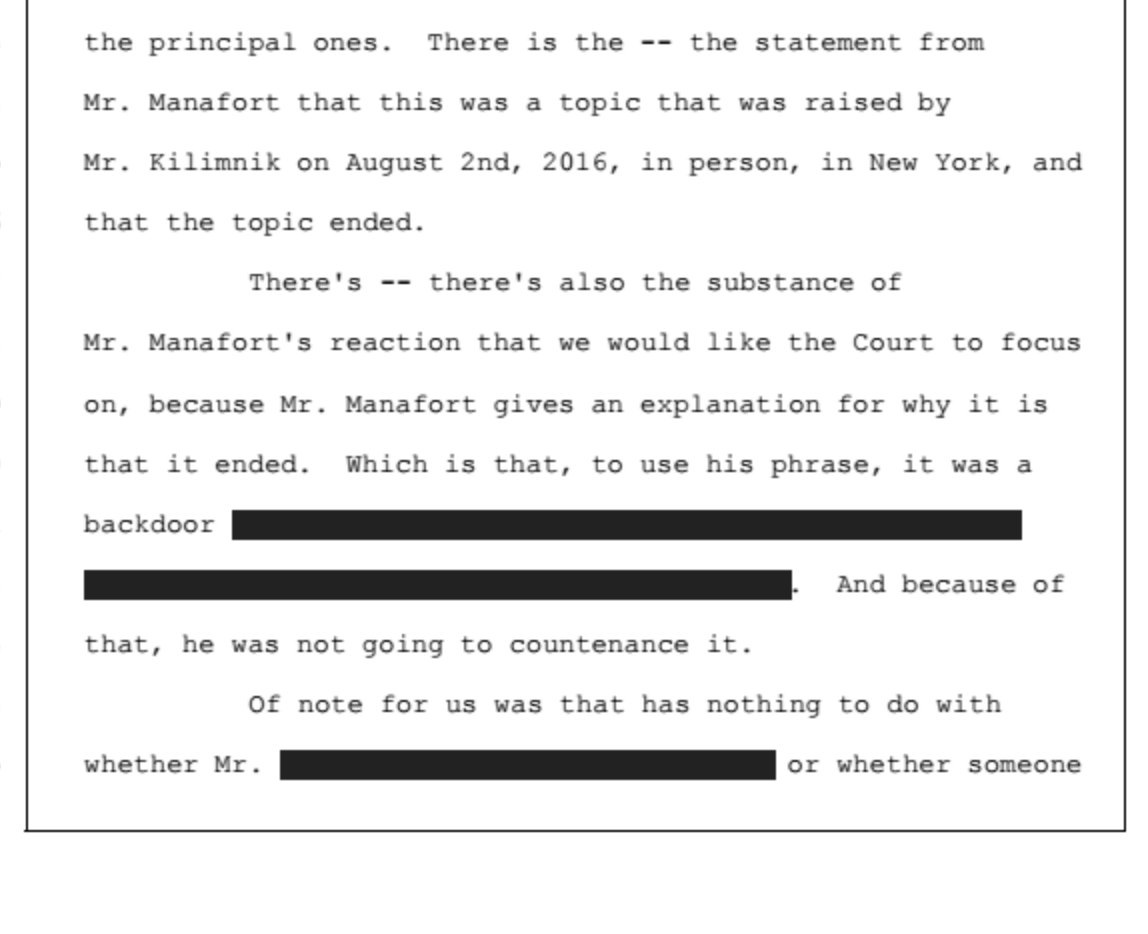 4/ A guess: "It" was related to Ukraine, and so it seems to be the “peace” plan whereby Putin gets Crimea and sanctions lifted.
theatlantic.com/international/…
Defense counsel argued that the OSC position was “nonsense” because whoever was elected, "sanctions would continue." [um. . .?]
5/ The meeting in which “it” was discussed was an in person meeting in NYC on Aug. 2, 2016.

Gates, Manafort, and Kilimnik were there.

During this meeting, Manafort was “walking” Kilimnik through something [polling data, maybe?]

6/ This was after the GOP Convention, while Manafort was still Trump's campaign chair, and 3 months before the election.

After the meeting, Manafort, Gates, and Kilimnik took the precaution of leaving through separate doors. [Like a real life spy thriller—with real life spies?]

Nope. OSC has evidence that Manafort was in favor of “it” and continued pursing “it."

8/ The Jan, 2017 meeting occurred in person when Kilimnik came to the inauguration.

There was corroborating evidence in email and GJ testimony from Gates.

Defense counsel argued that Gates's word should be disregarded because he’s unreliable.
The judge rejected that argument.
9/ The judge asked OSC to explain the importance of “it”

OSC said it "goes very much to the heart of what the Special Counsel’s Office is investigating.” [i.e. TrumpRussia connections?] 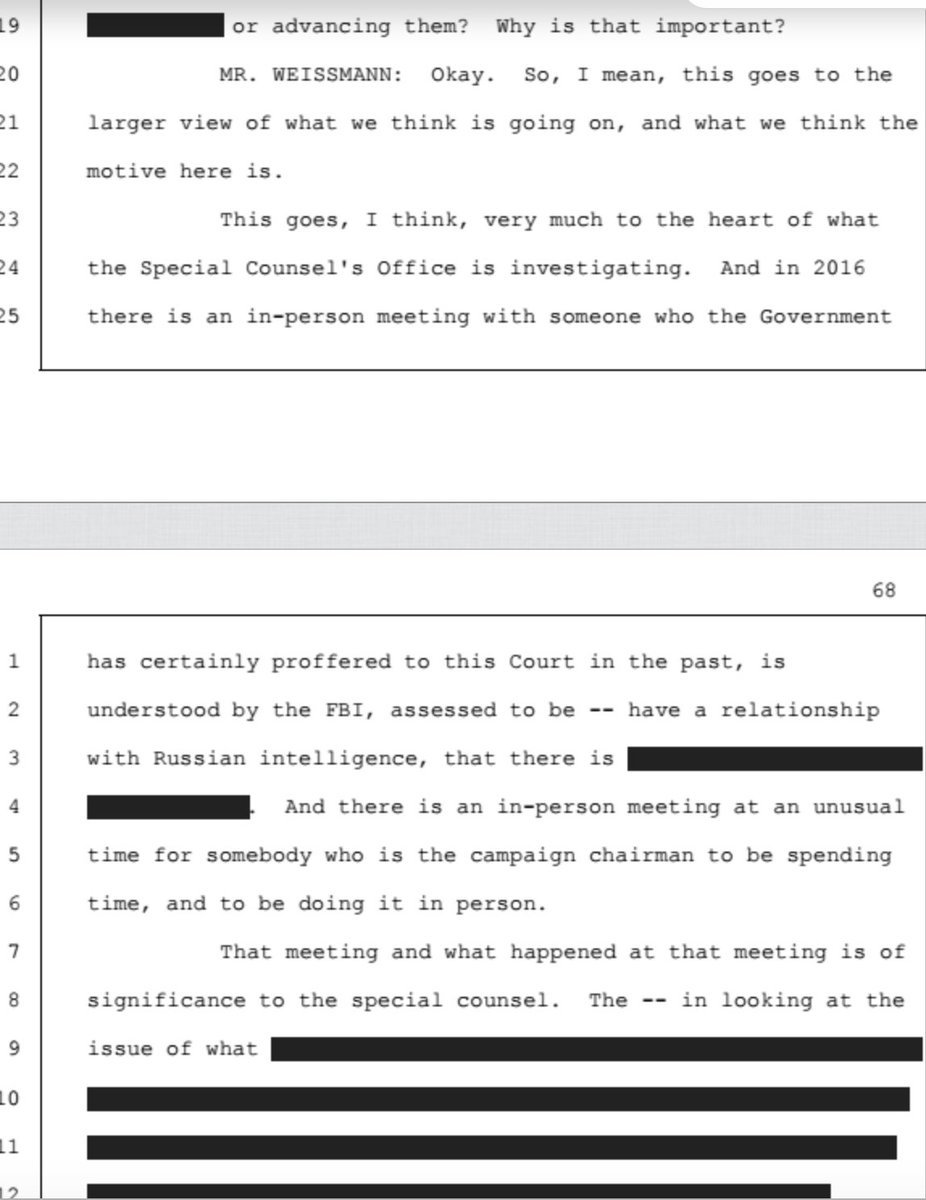 10/ OK, so, Trump’s campaign chair is meeting with a Russian intelligence guy 3 months before the election. They talk about “it” and continue talking about "it" for the next few years.

Now, onto the next lie: the 125K payment.
11/ The payment was made to Firm A working for Manafort in 2017, which performed work for Entity B (reportedly Rebuilding America Now, as per NYT.)

OSC thinks there was a [ ] scheme going on. Details omitted. 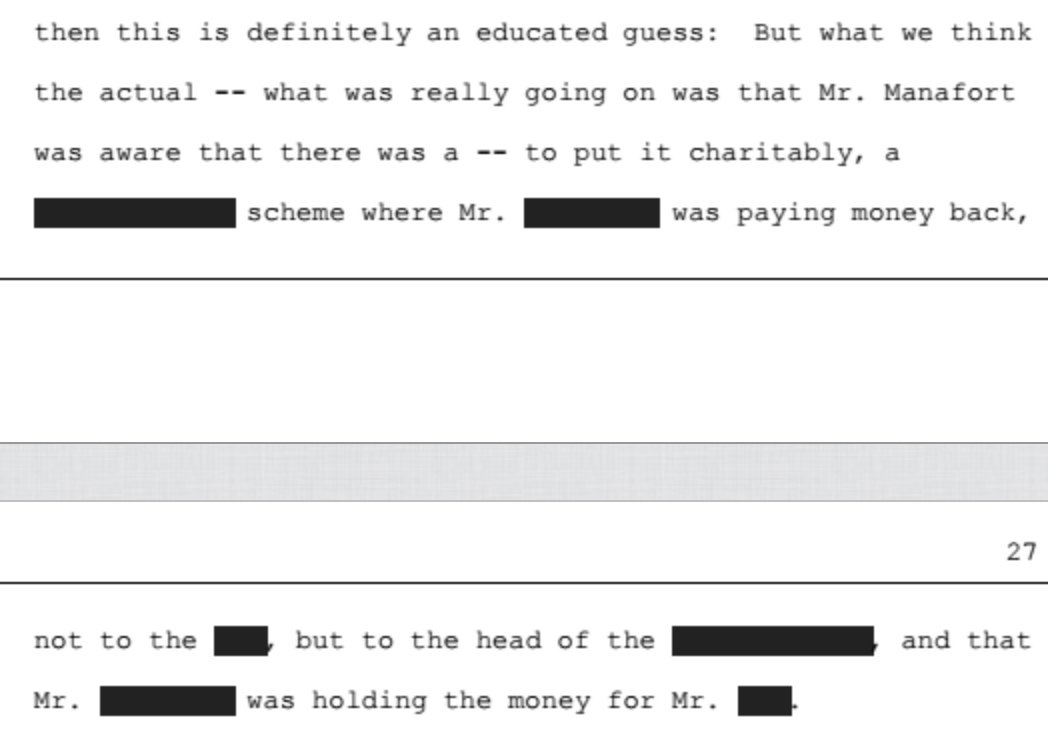 OCS concludes that layers of lies about the $125K means something “nefarious” was happening, and Manafort was aware of the [ ] scheme.

The OSC suggests it would not be “well received” if Trump’s supposedly unpaid campaign manager was in fact getting [ ], which wasn't reported in the “contract.”

14/ I assume from context that the contract is Manafort’s employment contract with the campaign.

My guess is that the money has a Russian source, which is why the payment wouldn’t be “well received.”

Trump’s campaign chair is meeting with Russian intelligence during the campaign, advancing Russian interests, while getting paid from a source that would embarrass people (it wouldn’t be "well received").
16/ Next lie: Manafort said that Kilimnik only worked on the Hapsburg Group project in Europe, but in fact, he also worked in the project in the US. (p. 52)

According to OSC, Manafort lied because “he did not want to provide any evidence" against Kilimnik.
17/ IOW, Manafort is protecting Kilimnik.

OK, so, what the heck is the Hapsburg Group?
From this indictment justice.gov/file/1094141/d…
we learn that a group of former senior European politicians did some secret lobbying in the United States. 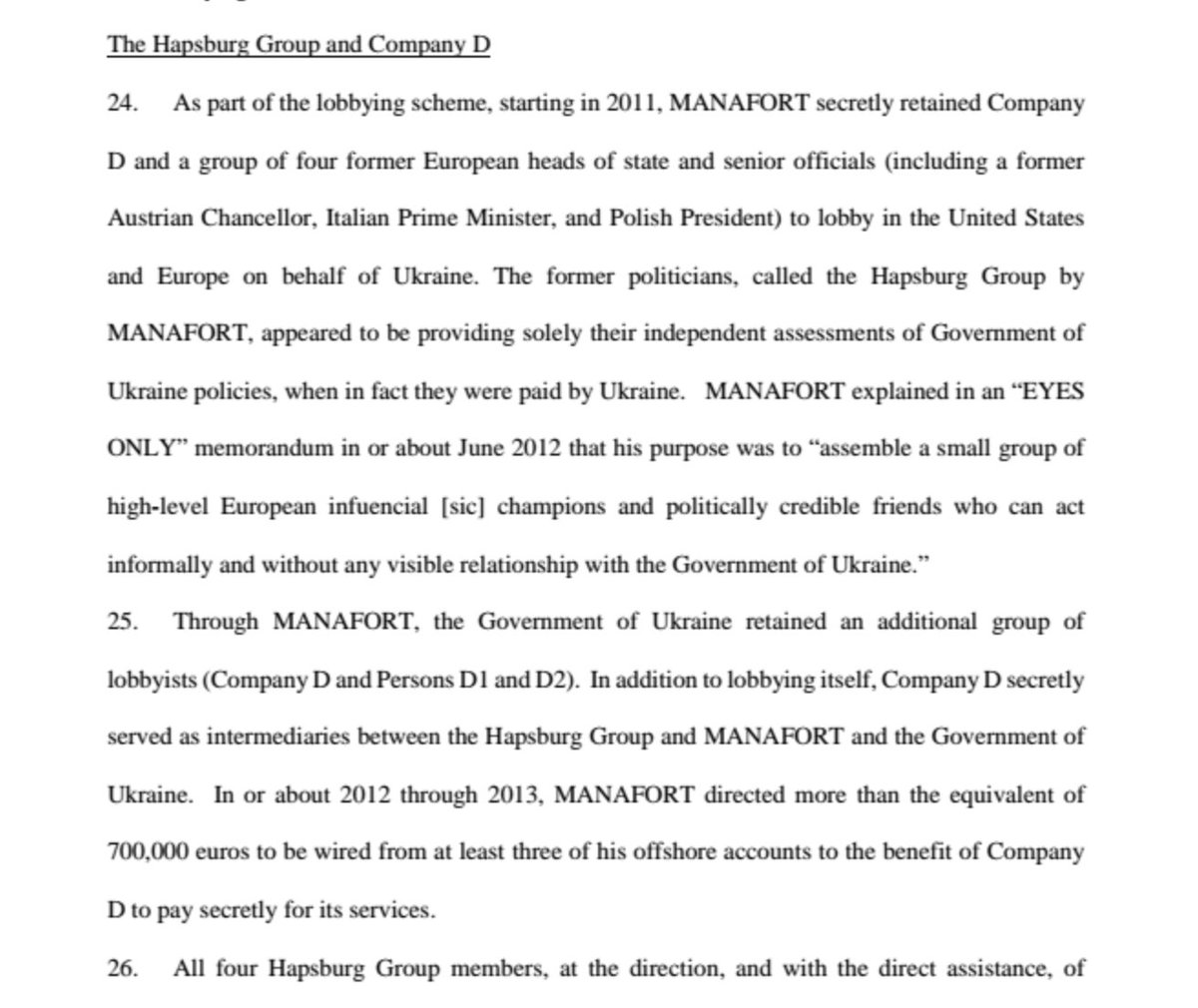 18/ "Ukraine" reference I assume is the pro-Putin Party of Regions, and Manafort's (former?) employer.

The scheme was pure fraud (like others we seen from Manafort) with the Group “appearing to provide solely independent assessments” when in fact, they were paid lobbyists.