The events Wednesday and Thursday—beginning with Trump storming out of a meeting, and culminating with Trump tweeting a doctored video of Pelosi—went beyond the usual level of bizarre.
nbcnews.com/politics/white…

But don't be fooled . . .
1/ There’s a method underlying what appears to be Trump-GOP madness.

Let’s start with Pelosi’s description of the events.
speaker.gov/newsroom/52319/ The Democrats went to the meeting prepared to “offer the President the opportunity to launch a historic infrastructure initiative.”
2/ The infrastructure bill included roads and broadband in rural areas.

The question remained: how to pay for it.

Three weeks earlier, they agreed Trump would work up a proposal for how to pay for the infrastructure bill and present his proposal at the Wednesday meeting.
4/ The day before the meeting, Trump “sent signals” that he wasn’t interested, or wasn’t ready.
speaker.gov/newsroom/52319/
As Pelosi described what happened next, Trump entered the meeting, reached into his “bag of tricks,” and pulled a “stunt.”
5/ Trump had a “temper tantrum” and called off the meeting, saying he was angry that Pelosi had accused him of engaging in a cover up.

Because the Democrats had been talking about a cover up for a while, Pelosi concluded Trump was inventing excuses.
speaker.gov/newsroom/52319/
6/ Trump then marched out to the Rose Garden and delivered a speech filled with lies.
cnn.com/videos/politic…
Trump accused the Dems of investigating him as a part of a "take down" attempt.
7/ WH Press Secretary Sanders said the Dems “spend all of their time attacking him,” which makes sitting down in a meeting “not even in the realm of possibility.” politico.com/story/2019/05/…

Trump thus turned a policy issue “should we fund infrastructure?” into an “us v. them” feud.
8/ Trump thus torpedoed the infrastructure bill while creating a round of spectacle and trying to blame the Democrats. 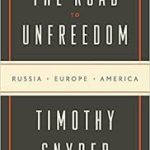 9/ Snyder explains that leaders who want both wealth and power cannot govern in the traditional manner. See👇

It also creates a stronger democracy.
11/ The GOP leadership lies for Trump and shields him because they also want an oligarchy.

The rank and file supporters (those harmed by the torpedoing of infrastructure bills) lie for Trump and shield him because he gives them what they want more than economic opportunities.
12/ They want Trump to do battle with their “enemies”—minorities and immigrants who they think are taking what is rightfully theirs, and the liberals and Democrats who support minorities and immigrants.

They want to return to a (white) patriarchy, and Trump promises that.
13/ If would-be oligarchs like Trump don’t govern in the usual sense of creating policy to better the lives of the citizens, what do they think about and do all day?

They govern by creating crisis and spectacle (Snyder)
They identify and neutralize their enemies. 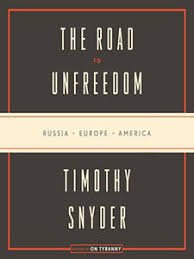 14/ They create fights. They offer insults and grievances.

Each time he does something outrageous, a chorus of voices insist that he’s screwing up, he's flying by the seat of his pants, and any moment he’ll bring about his own ruin.
15/ People have been saying that for too many years for it to be true. We underestimate him (and the effectiveness of his methods) at our own risk.

He creates strong emotions: Outrage in his critics & euphoria in his supporters, who thrill when he does battle with the "enemies."
16/ If you compare Trump to a traditional president like Obama, he appears to be constantly stumbling, misspeaking, misspelling words, and failing.

But when you evaluate him as a would-be oligarch and creator of crisis and spectacle, his talent becomes evident.
He's good at it.
17/ Trump creates a story and forces us all to become actors in the show.

He pulls his critics into a never-ending game of whack-a-lie, which keeps everyone spinning and wears everyone out.

You can't think coherently while you're spinning and playing whack-a-lie.
18/ The liar has an amazing advantage in that game. He can reel off several lies per minute. Each lie, on the other hand, can take hours to research and refute.

Everyone is so busy spinning and whacking lies they forget about infrastructure and the policy debate at it's core.
19/ We need to counteract the spectacle by bringing down the level of hysteria.

Yes, Trump is trying to destroy our democracy. So we need to build it back up and strengthen it.

So everyone needs to stay focused and get busy.

Need ideas? See👇
terikanefield-blog.com/things-to-do/
end/
I agree that parts of the book are rough going, especially the beginning.
For people who don't have time to wade through a densely written book, I suggest listening to Snyder's You Tube series, "Timothy Snyder Speaks." twitter.com/NettieD53/stat…
The best thing people can do is take steps to strengthen the democracy. I did voter protection work in 2016 and 2018 and plan to do a lot more in 2020.

Find out how your local elections are conducted and get involved, or volunteer some other way.
twitter.com/TheReallyRealP…
All my threads are also blogposts. You can view this one here: terikanefield-blog.com/the-trump-real…
Thank you. twitter.com/BWoody1213/sta…

If you feel inclined to answer the doomsayers ("Democracy is already dead! We won't have elections in 2020!") ask what constructive steps they are taking to remedy the situation. (Spreading panic doesn't count).