This is how we get to the kind of cruelty ⤵️ we see at the border.

Yale professor @TimothyDSnyder explains how such cruelty is possible.
1/ If you missed my thread on victimization, it’s here: twitter.com/Teri_Kanefield…

We start with the anxiety and anger created when the dominant culture (white Christians) feels victimized by encroaching equality.
2/ Then the would-be oligarchs (Trump & pals) create policies to make things worse for those who see themselves as victims.

Trump says, “I feel your pain.”
Then he takes deliberate steps to make their pain worse: Tax cuts for the rich, trade wars, eliminating health care, etc.
3/ If the ACA is struck down, 21 million Americans can lose health insurance. nytimes.com/2019/03/26/hea…
This will cause an abundance of suffering.

Trump & pals then channel all that suffering into anger at immigrants, minorities, and the Democrats who champion their rights.
4/ Trump tells his followers that he's the warrior protecting them from minorities who are displacing them, and from beggars at the gates who want to take what they have.

The myth of scarcity is told by billionaires enriching themselves at the expense of the people.
5/ For a more in-depth explanation of the history and concept of sadopopulism as coined and explained by @TimothyDSnyder see twitter.com/Teri_Kanefield…

The myth is that immigrants and minorities are taking what rightfully belongs to “real” Americans.
6/ Like all myths, it isn’t true—but it’s a good story.

This person ⤵️either believes the myth or is trying to spread the myth.

In fact, immigrants and minorities have helped build America and make it strong.

This is what Trump does well: He invents good stories. 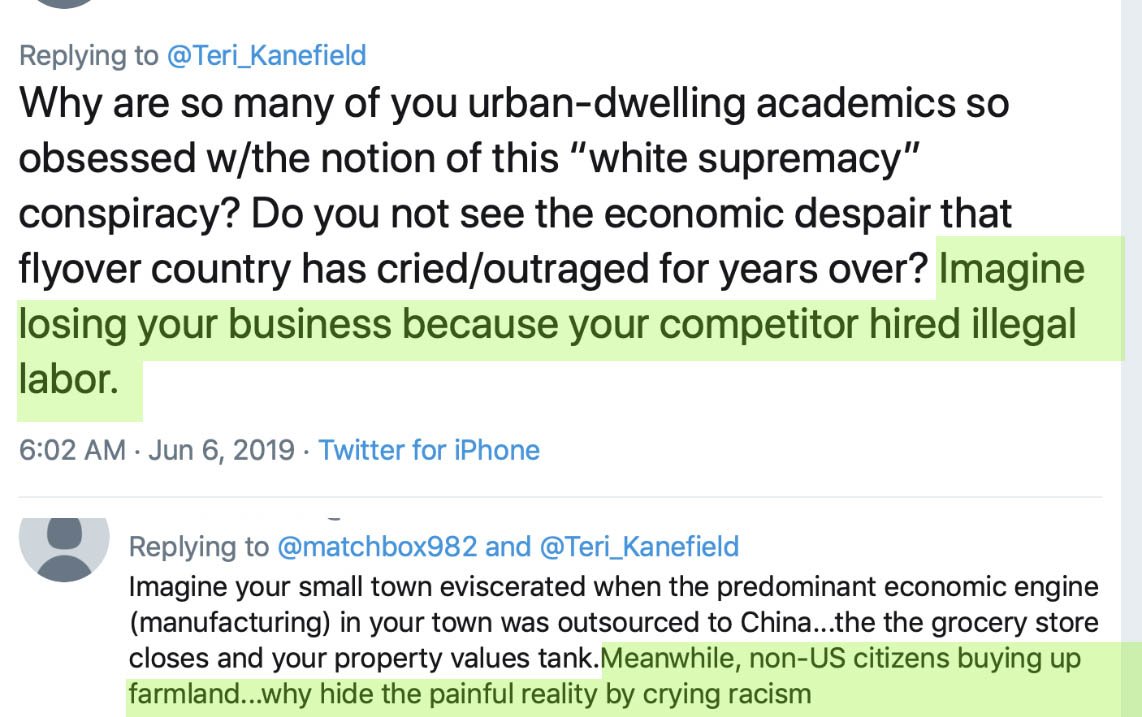 7/ He creates an alternate reality that appeals to his followers. His stories are easy to spread, hide the truth, and keep people confused.

Destroying democracy is so much easier than preserving it.

You just have to get everyone fighting, and then keep the fighters fighting.
8/ A lot of people don't like democracy because it requires equality, which also requires a reduction in income inequality.

NYT reporter Maggie Haggerman explained that Trump’s base “thrills at his fights with the establishment, seeing him as warrior against self-satisfied elites who look down on many Americans. . . ”
nytimes.com/2018/12/22/us/…
10/ Remember: The way to destroy democracy is get everyone fighting. The angrier people get, and the more polarized the society, the more people are willing to tolerate "hardball tactics" from their own side.

Look at how Trump creates a cycle of rage and fighting.
11/

It’s self-feeding. The angrier the liberals get, the more thrilled his supporters feel.
12/ Meanwhile, the polarization widens.

The polarization most endangers our democracy. See ⤵️
twitter.com/Teri_Kanefield…

As the fighters get angrier, they resort to “hardball” tactics, which batters and wears down democratic institutions.

For new followers, I also research solutions. What I learn about how to solve the problem is filed on my blog under “Solutions.”

Here is an example of a “solutions” thread: twitter.com/Teri_Kanefield…

End/
My threads are also blog posts. You can read this one here: terikanefield-blog.com/victimization-…