The natural inclination is to answer this question by offering a list of crimes Trump has committed.

In fact, I'll go ahead and do it, in the thread.

There are, however, two problems with this approach. twitter.com/ouroborosHotS/…
1/ Problem #1: Anyone asking this question is challenging you. Logic and facts are not likely to move this person.

For why, see this thread I wrote last April on what we're likely to see from the Republican Party when impeachment begins ⤵️
twitter.com/Teri_Kanefield…
2/ Trump and Trump supporters are mounting an attack on truth and reality itself. More than 1/3 of the population supports this attack.

If you missed that thread, read it so you can prepare yourself for what’s coming now that impeachment is underway.
3/ Problem #2: The criminal code is inadequate to describe impeachable behavior.

The criminal code is written to apply to all people. We don’t write criminal codes that apply to some people, but not others.
4/ There are things that the President of the United States can do that are dangerous, that are not dangerous if an ordinary person does them.

To take a random example: If an ordinary citizen would be broke without a secret income from Russian oligarchs, it wouldn't be a crime.
5/ Who cares if an Ordinary Citizen is in debt to Putin?

They used the terms “high crimes and misdemeanors,” which prompts people to say, “What is the President’s crime?”
7/ When people in 2019 say, “What is the crime,” they mean, “Where is it in the federal criminal code?”

But the federal criminal code didn’t exist when the Constitution was written. The founders could not intended impeachment to depend on what would later be deemed a crime.
8/ (I'm skipping for now a discussion what "high crimes and misdemeanors" meant in the 18th century.)

Moreover, the criminal code cannot include all possible crimes. The first time someone comes up with a clever way to manipulate the system, that person can't be convicted. . .
9/ . . . because if it's the first time anyone thought to do it, it isn't a crime yet.

Cheating is sometimes a crime, and sometimes not, depending on what specific elements are listed in the criminal code.

But cheating is always morally wrong.
10/ This brings us to another problem with the criminal code: Not everything dangerous or morally wrong is a crime. That would be impossible. We pick and choose.

We don't impeach each time a president does something wrong or even illegal. List from ⤵️ 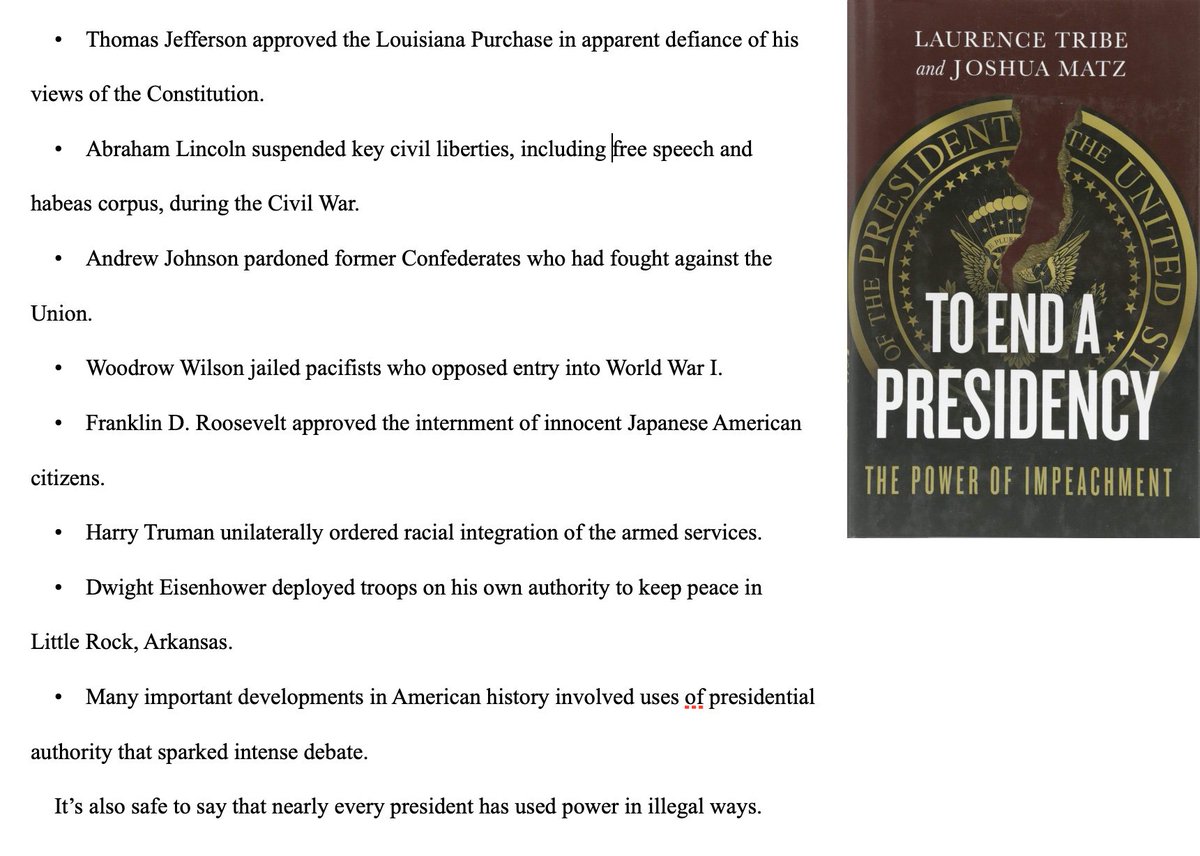 11/ This runs the danger of impeaching a president for policy considerations we don't like. Remember how often right wing media outlets accused Obama of defying the Constitution?

Here Pelosi distinguished what is impeachable from what is not ⤵️
twitter.com/Teri_Kanefield…
12/ Pelosi said an impeachable offense:

💠endangers national security,
💠undermines the constitution by stripping away checks and balances (for example, when Trump says Article II means he can do whatever he wants) and
💠undermines election integrity.
13/ She also noted that each of these three were evident in Trump’s phone call with Zelensky and the surrounding circumstances.

If a president is using the powers of his office to secure the next election for himself, impeachment is the only possible recourse.
14/ Benjamin Franklin pointed out that if the Constitution didn’t include an impeachment provision, the only way to get rid of a president who corruptly used his office to remain in power would be to assassinate him.

(Franklin gets to the heart of the matter)
15/ Luke needs to tell his friend that Trump is engaging in impeachable by conducting foreign policy to benefit himself and to help crush a political rival in order to bring about his own reelection.

See Benjamin Franklin quotation ⤴️
16/ One problem with thinking of crimes in connection with impeachment is that it invites wrong thinking, such as “each element must be proven beyond a reasonable doubt.”

Impeachment is more like civil trial in which the standard is preponderance of the evidence. . .
17/ Protections for criminal defendants are in place because the defendant is at risk of losing constitutionally protected rights such as liberty, property, and perhaps even life, in capital offenses.

The president merely risks being removed from office.
18/ Being president is not a constitutionally protected right.

With those caveats, I'll list a few of Trump's crimes, even though I think it will be pointless and possibly distracting.

And even though I cannot offer a comprehensive list.

I don't want to be here all day.
19/ Bribery. The elements are here: law.cornell.edu/uscode/text/18…
Yes there was quid pro quo in the Zelenskyy phone call and surrounding circumstances. Lots of people have explained: vanityfair.com/news/2019/10/e…
20/ Extortion (it seems to me) may better describe the Trump-Giuliani behavior.

Extortion is gaining something of value by means of a threat. extortion.uslegal.com/elements-of-ex… Trump was gaining an investigation into Biden by threatening to withhold aid and fail to support Ukraine.
21/ Obstruction of justice. For obstruction as given in the Mueller report, see:
terikanefield-blog.com/reading-the-mu…
Mueller offered two reasons for not bringing an indictment for obstruction of justice:

(2) separation of powers considerations—the task was given to Congress. (Vol. II, p.1-2)

Each time the White House defies a subpoena or exerts the phony “executive privilege” Trump is obstructing justice.

Think of it as a running crime spree.
23/ Federal Election Campaign Act uscode.house.gov/view.xhtml?pat…
This statute, among other things, prohibits foreign national contributions.
It also outlaws the $130K Stormy Daniels payment.

(Trump's former personal lawyer Cohen is in jail for helping Trump do this.)
24/ Federal employees & Personal and family relationships (5 CFR 2636.502)
law.cornell.edu/cfr/text/5/263…
This one says that a federal employee has to make sure his private business matters do not affect his impartiality when carrying out official duties. See⤵️
cnbc.com/2018/11/06/iva…
25/ The Hatch Act prohibits federal employees to use their titles to promote partisan politics. To take one example, the OSC, a federal agency, found that Kellyanne Conway violated the Hatch Act.

Did the White House Care?

Nooooo.
cnbc.com/2018/03/06/spe…
26/ Insider trading is any manipulative or deceptive device used in connection with the purchase or sale of any security, including the purchase or sale of a security of any issuer, on the basis of material nonpublic information about that security.
law.cornell.edu/wex/insider_tr…
27/ Reporting indicates that Trump tipped off a billionaire friend that he would be raising tariffs on steel; his friend dropped his stocks and thus saved himself boatloads of money. thinkprogress.org/trump-ichan-st…
28/ The Logan Act
law.cornell.edu/uscode/text/18…
The facts in Flynn's plea agreement are a violation of the Logan Act, which forbids private citizens to conduct foreign policy with any foreign government or agent of a foreign government.
29/ Misprision of Felony
law.cornell.edu/uscode/text/18…
If you know someone committed a felony, and you conceal that fact, you can be fined or imprisoned.

How hard does Trump work to conceal and deny Russia’s attack on our elections?
30/ Witness Tampering
law.cornell.edu/uscode/text/18…
I could fill a thread with examples of how Trump has tried to intimidate and silence witnesses against him.

Also:
💠bank fraud (see Cohen's testimony before Congress)
💠tax evasion (was that $130K reported to the IRS?
31/ EMOLUMENTS (listing these would require another long thread)

Don't forget the NY AG is suing the Trumps for “persistently illegal” and and “repeated and willful self-dealing transactions” in their management of the Trump Foundation:
twitter.com/Teri_Kanefield…
32/ That last one, to put bluntly, is "stealing from charity."

See why I don’t believe the question “Where is Trump's crime?” is a sincere question.

Don't fool yourself: The Fox-GOP loves the fact that Trump is trampling the Constitution and breaking laws.
33/ The thing to remember is this: Trump's base and the supporters of McConnell are a shrinking minority.

Their base is shrinking, so they can see their medium and long-term prospects are not good.

They are engaging in these destructive tactics because they are desperate.
35/ The Fox viewership is aging.

Now that the Democratic Party has morphed into the party of young people, urban intellectuals, and minority communities, they have excellent long term prospects.

Democracy will survive if enough people want it to.
36/ That's why the solution is for everyone to get busy.
See my list⤵️

This may be my longest thread ever.

But it wasn't my fault.🤷‍♀️

Someone asked "Where is Trump's crime."
That cannot be done briefly.
terikanefield-blog.com/things-to-do/
Looks like I mis-numbered. twitter.com/HippyJoe0707/s…

It's always something. If I type correctly, I count wrong.
In addition to the above, see how expertly @AshaRangappa_ answers the question, "Was there quid pro quo."

She says yes, and then immediately transitions to the larger issues, the way the incident undermines national security and truth . . . twitter.com/AshaRangappa_/…
@AshaRangappa_ . . . she uses the phrase Marketplace of Ideas.

Without truth, there's only power* which brings us back to the start of the thread: Corrupt use of power to consolidate Trump's own power.

During the discussion at the Constitutional convention about whether to include impeachment for self-dealing presidents . . .
@AshaRangappa_ @jasonintrator . . . for whom removing them at the next election wasn't an option, Franklin quipped that, “Anyone who wishes to be president should support an impeachment clause, because the alternative would be assassination.”
@AshaRangappa_ @jasonintrator (I've seen it given a few different ways. I haven't checked the original source)