When you consider what Trump—as president—does all day as his “work” it makes sense that the way Pelosi and Schiff are conducting this impeachment is throwing off his game.

@TimothyDSnyder
explains Trump's "task" is to create crisis & spectacle. twitter.com/JoyceWhiteVanc…
@TimothyDSnyder 1/ The hitch is that Trump needs to invent the crisis and control the spectacle.

He can’t do that with the impeachment probe. He has lost control of the media narrative.

People make fun of how much cable TV Trump watches. Of course he watches TV. How else can he plan his game?
@TimothyDSnyder 2/ Because he lost control of the narrative, he can’t “govern” the only way he knows how.

Snyder explains that governing by [invented] crisis and [controlled] spectacle is a fascist means of gaining and maintaining power.⤵️

The technique comes from Putin. . . 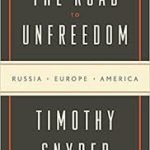 @TimothyDSnyder 3/ . . who learned it from an obscure Russian fascist philosopher, Ivan Ilyin.

(Yes, Trump is smart enough to use this technique. He’s a natural, and the technique isn’t hard.)

Ilyin was a Russian nobleman who went into exile after the communist revolution.
@TimothyDSnyder 4/ An admirer of Hitler and Mussolini, Ilyin wrote guidelines for Russian leaders who would come to power after the fall of communism. (He died in 1954).

Ilyin believed fascism would eventually replace both communism and democracy.

Ilyin admired totalitarianism and order.
@TimothyDSnyder 5/ The nation, for Ilyin, was like a body. The citizens are the cells.

Each must remain in its place.

Ilyin disliked the middle class, which was always striving for social advancement. . .
@TimothyDSnyder 6/ Ilyn believed that this fractured society and created chaos.

He thought the rulers at the top should rule, everyone else must remain in their place.

He thus advocated oligarchy (a few people hold all the power).

The task of government, for Ilyin, is to create stability.
@TimothyDSnyder 7/ Stability isn’t possible with a middle class always trying to lift itself up.

Thus the task of the oligarchs is to preserve the status quo, which means preserving their own wealth and power.

But you can’t tell the people THAT.

So you tell them a good story. . .
@TimothyDSnyder 8/ You tell them the oligarchs are “redeemers.”

The Leader-Redeemer creates a “mystical connection” with the nation and the people.

He earns loyalty by protecting the people from "enemies."

The fascist way to power is to promise to restore the nation to its mythic greatness.
@TimothyDSnyder 9/ In a liberal democracy (meaning ⤵️) presidents spends their days devising policies that make life better for the people.

An oligarch or would-be oligarch can’t do that!

If he does, others can rise up and challenge his place at the top.

There will be no "stability." 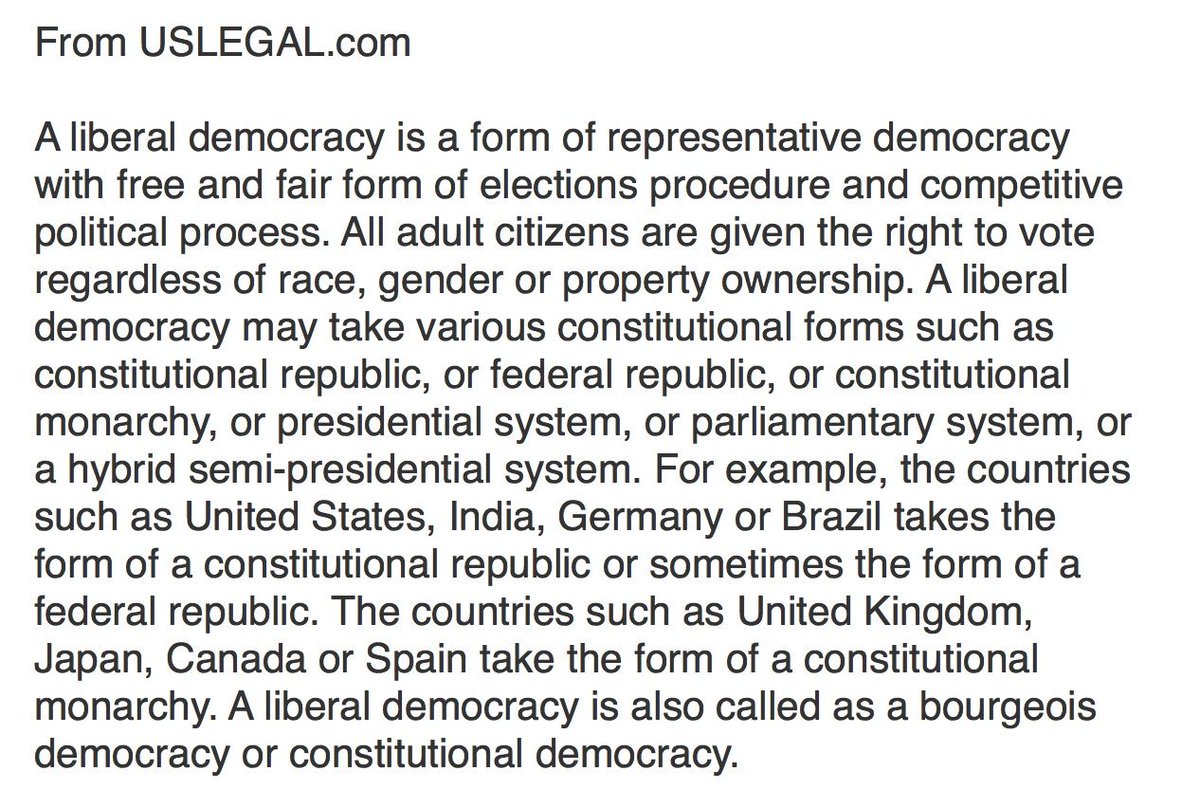 @TimothyDSnyder 10/ OK, so if Leaders don’t govern in the usual sense (devising policy to better the lives of the citizens) what do they do all day?

They select enemies that can’t actually hurt them (like homeless poverty-stricken migrant families.)

This way they don't have to worry about actual bombs falling on their own heads.

It's much safer.
@TimothyDSnyder 12/ What Trump does well is control the media narrative.

He does this partly by creating outrage. See: twitter.com/Teri_Kanefield…

He didn’t mind that the Mueller probe was hidden from the public because he and his lawyers knew what was happening behind those closed doors. . .
@TimothyDSnyder 13/ . . . so he knew how to spin the narrative.

He misdirected everyone by shouting “NO COLLUSION" for 2 years ⤵️

When there wasn't evidence beyond a reasonable for conspiracy, he shouted “COMPLETE EXONERATION.”
twitter.com/Teri_Kanefield…
@TimothyDSnyder 14/ The only thing Trump can do now is flex his muscles and obstruct the proceedings.

But it isn’t working!

When he obstructs, Schiff announces that they’ll simply fold the obstruction into the Articles of Impeachment.

They already have enough.
@TimothyDSnyder 16/ “At the White House, a grim sense of frustration has set in. . . several (aides) expressed fear that other witnesses would come forward . . .” ⤵️

Of course Trump is frustrated!

The House Democrats are in control of the narrative.
@TimothyDSnyder 17/ Trump can’t do his "work" which consists of

💠controlling & spinning the media narrative,
💠inventing the kind of crises he likes, and
💠sending his critics spinning with outrage.

People are always amazed that Trump supporters vote against their own economic self-interest.

But Trump gives them what they want more than economic advancement: A fight against their "enemies."

They love the fight and the show.
@TimothyDSnyder This, too ⤵️ twitter.com/schroedinger_/…

A fascist technique is to create "us v. them" (see @jasonintrator's book)

"He's a corrupt liar, but he's OUR corrupt liar. [Biden / fill in the blank] is the enemy corrupt liar. So let's stick with our corrupt liar."
@TimothyDSnyder @jasonintrator Another good point. twitter.com/waldenevening/…

Also, the wrongdoing occurred within the Trump campaign, so the only witnesses were Trump world insiders.

This wrongdoing occurred in the White House, so we have witnesses in the State Department and other agencies.
@TimothyDSnyder @jasonintrator Excellent question. twitter.com/Noog_Man/statu…

Back when Trump appeared to be trying to goad the House into impeachment, it was when impeachment would have been basically about the Mueller findings.

The Ukraine scandal entirely changed everything.

With the Mueller stuff. . .
@TimothyDSnyder @jasonintrator . . .he knew how to control the narrative because he knew the parameters.

Answering this question overlaps with the mistake that the "impeach right now" people were making last spring.

Legally, the House can keep impeaching. Politically, it would be insane.

Imagine this. . .
@TimothyDSnyder @jasonintrator . . . a prosecutor brings charges (obstruction of justice, for example) in June. The jury acquits. Then in September, the prosecutor says, "I have more evidence on that guy! Let's have another trial!"

See how that looks?

If Trump had been impeached last spring. . .
@TimothyDSnyder @jasonintrator . . . the public was bored with stuff that happened before he took office, during the campaign. The House would ahve impeached, the Senate would have acquitted, Trump would have declared himself Completely Exonerated.

The House would have looked silly impeaching again. . .
@TimothyDSnyder @jasonintrator . . . and Trump would have been insulated from any additional impeachments.

Pelosi has decades of Intel experience. A lot of the Ukraine stuff happened in the open.

What's happening now is much more serious and compelling.

Pelosi waited for this to come out.
Check mate.
@TimothyDSnyder @jasonintrator Either Pelosi got lucky or she knew what she was doing.

Given that she's the most experienced and savvy person in politics, I'll take Door #2.

Being a woman complicates this. People are less likely to assume she knows what she's doing.

Giuliani's financials led to a counter-intelligence investigation, which no doubt is linked to both Trump's finances and the Ukraine scandal.

Trump's financials could have brought us to almost the same spot.

twitter.com/dtmbehave/stat…
@TimothyDSnyder @jasonintrator All my threads are also blog posts. You can see this one here: terikanefield-blog.com/crisis-spectac…
@TimothyDSnyder @jasonintrator I was poking around, looking for contemporaneous reporting to confirm some of what's in the Whistleblower Complaint, when I found this:
foreignpolicy.com/2019/05/07/us-…
I am becoming more persuaded that Speaker Pelosi knew something was up in Ukraine, and that it would come out.

BTW. . .
@TimothyDSnyder @jasonintrator . . just after I posted those flattering remarks about Pelosi yesterday, this news broke:

People are amazed that Trump posted this image that makes Pelosi look so in command.

It seems to me that in Trump's misogynistic mind, a woman not looking like . . .

@TimothyDSnyder @jasonintrator . . . say, Stormy Daniels, is so unappealing, he assumes anyone seeing it will have a visceral anti-Pelosi reaction.

Think of those blonde Barbies on Fox, how Trump wants Ivanka to look, his comment about Fiorina's face.

For most of us, she's taking him down.

I'll just add this here, even though the thread is already too long.

She had the same idea I had yesterday: Trump is frustrated because he's unable to control the spectacle.