Me: “Portions of the GOP are partnering with Russia to achieve their domestic political agenda.”

A person I respect: “I need evidence before I’ll believe that.”

So I put together a sampling of the evidence.

2014: Pat Buchanan noted that Putin was “entering a claim that Moscow is the Godly city of today” and stamping out western evil like easy divorce and homosexuality. See⤵️ 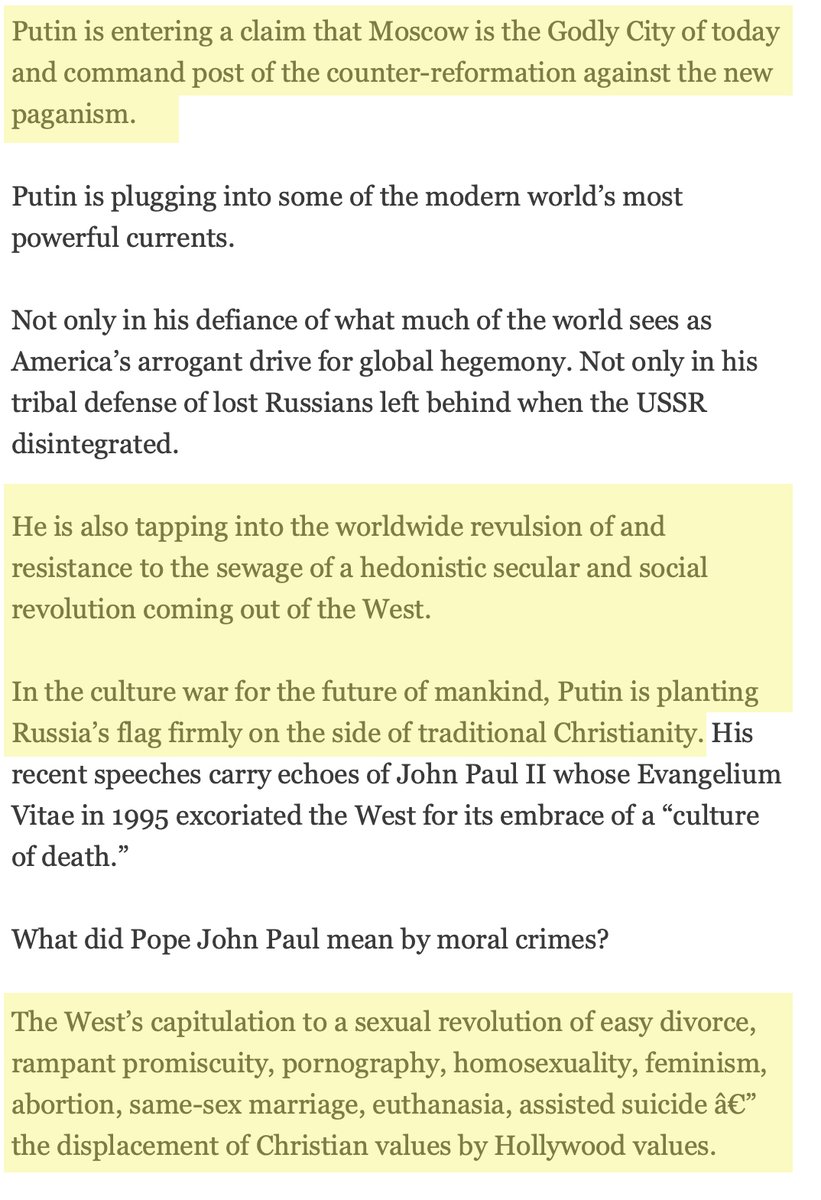 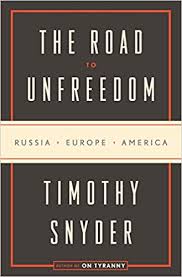 3/ In 2015, “Russian authorities were cooperating with the American gun lobby [NRA]” 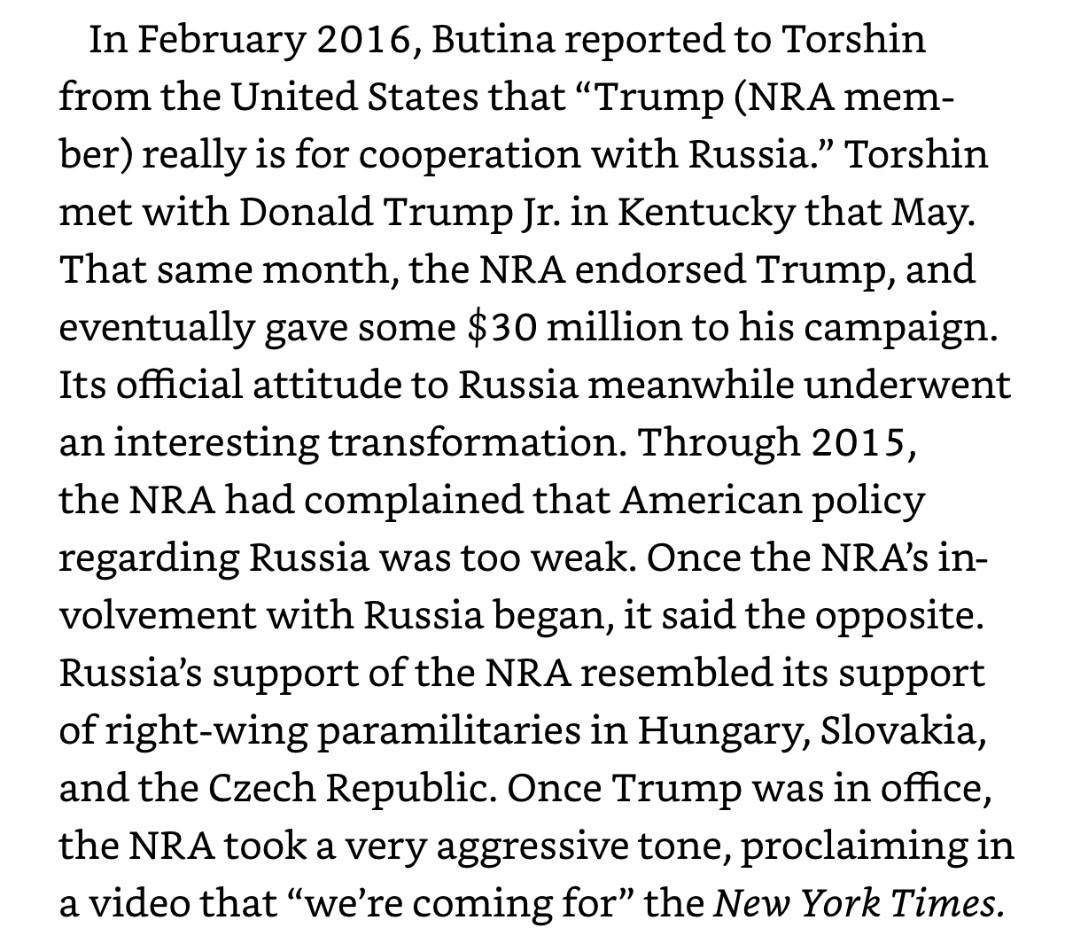 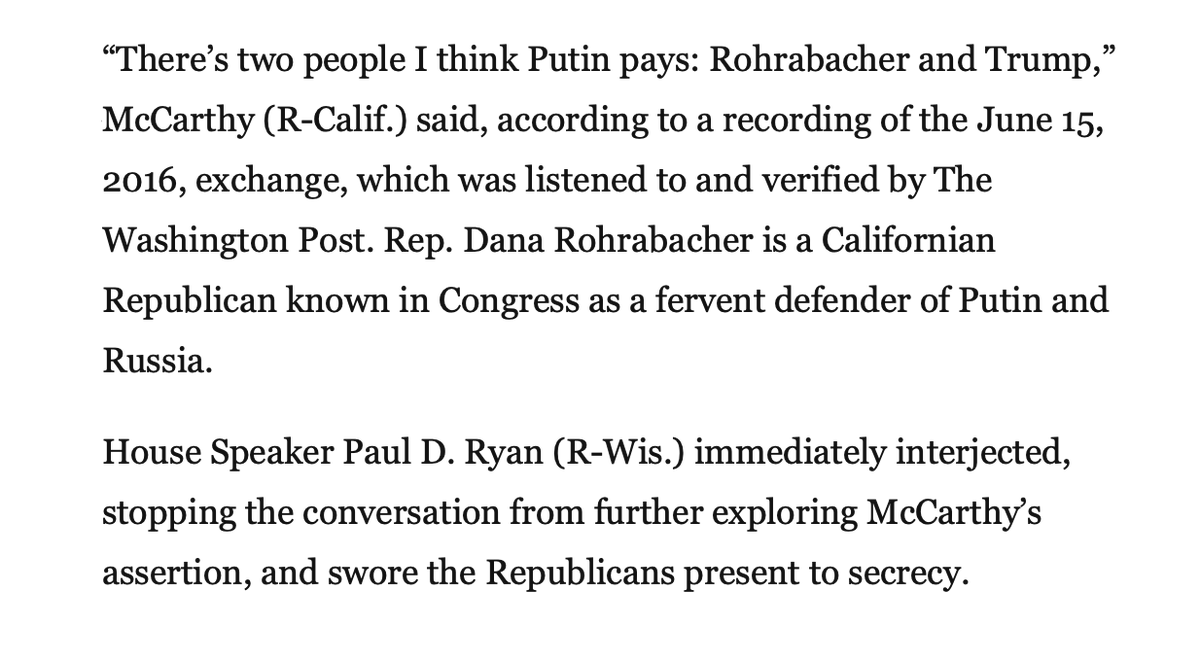 washingtonpost.com/news/democracy…
6/ In the Motion for Pre-Trial Detention for Christopher Paul Hasson (the guy planning to mass murder liberals) is quoted as saying “Looking to Russia with hopeful eyes.”
scribd.com/document/40010…
7/ [Narrator: We see Russia beckoning to America's far right wing, establishing itself as the savior of the white (Christian) race.]

March 16, 2016: Sen. McCain accused Sen. Rand Paul of working for Putin: cnn.com/2017/03/16/pol…
8/ The Mueller report, pp. 67-173 documented numerous instances of “links and or coordination” between Russians close to Putin and the Trump campaign.

Trump Tower Moscow was in the works (67-80)
9/ Papadopolous (pp. 80-95) met the prof. & two Russian nationals. He pursued relations with Russians and kept the campaign informed about his outreach.

Carter Page (95-103) touted his “high level contacts in Russia,” traveled to Russia and cultivated those (and more) contacts.
10/ Dimitri Simes and the Center for National Interest (CNI), Russian think tank had contact with Jeff Sessions and Kushner, and hosted a Foreign Policy Speech at the Mayflower Hotel. Kushner and Simes stayed in contact after the speech.(103-110)

And of course, the famous email:

11/ April 5, 2017: A reporter for Breitbart began hosting a Russian propaganda radio show. theatlantic.com/politics/archi…
12/ Jun 14, 2018: Katie Hopkins, pictured with Ann Coulter, praises Russia as being “untouched by the myth of cultural multiculturalism and deranged diversity,” rt.com/uk/429777-kati…
13/ August 6, 2018: Sen. Rand Paul met Russian Senators in Russia to “open the lines of communication.” abcnews.go.com/International/…
He met with Sergey Kislyak, who had been in the May 10 Oval Office meeting when Trump bragged about firing Comey.
14/ Russian State TV declared Rand Paul a “loyalist” twitter.com/JuliaDavisNews…

May 4, 2019: Trump told Putin about the “Russian hoax” and didn’t tell him to stop interfering in our elections.
17/ Sept. 27, 2019: Giuliani had been planning to appear at a Kremlin-backed conference when the Ukraine scandal broke.
washingtonpost.com/politics/giuli…

That $1 million Lev Parnas lied about indicates that the Russians actually funded Operation Ukraine Shakedown.
18/ Now for the real meat: A GOP defense of Trump in the Impeachment debates that isn’t getting enough attention.

Trump’s GOP defenders threw out lots of garbage but buried in all that yelling was an important strand that was easy to miss.
19/ On multiple occasions, Trump's GOP defenders said Trump was justified in launching Operation Ukraine because there was solid evidence that Ukraine interfered in our election and that the Russian investigation was a hoax, so (to use Jim Jordan’s word, Trump was "ticked."
20/ Fiona Hill testified that Trump’s GOP defenders were pushing “a fictional narrative that has been perpetrated and propagated by the Russian security services themselves.”
npr.org/2019/11/08/777…
21/ The diplomats made clear that America was (and should be) on Ukraine’s side against Russia, which was the right thing to do for Ukraine and in America’s foreign policy best interests.

Then, on day 2 of the impeachment debate, Matt Gaetz made the comment that stuck with me.
21/ Gaetz suggested that the entire impeachment was a “policy disagreement about how to make Ukraine great again.”

What did he mean by policy disagreements about how to make Ukraine great "again" ? 🤔

22/ A word about the theory that the entire GOP is compromised and that's why they defend Russia.

The problem in that sentence is causation ⤴️

Of course they're compromised: The Kompromat is the evidence Russia has that they take Russian help and do Russia's bidding.
23/ In other words, there may be a mistake in thinking that they defend Russia BECAUSE they are compromised.

This gives them too much credit.

It assumes that if they were not compromised, the wouldn't be siding with Russia.
24/ I suggest that a significant portion of the GOP is "looking to Russia with hopeful eyes" as the savior of the "white Christian race", and a way to fight what they see as the "myth of multiculturalism and deranged diversity" gripping America and the West.
25/ twitter.com/MandyTyler76/s…
A few people asked me⤵️. I won't know until next week. The person is someone I know professionally and isn't a Trump supporter.

@TimothyDSnyder commented that for a lot of people, it's hard to pull it all together.

We've been so bombarded with news.
@TimothyDSnyder 26/ Repetition allowed "her emails," —a made-up scanda—to sink so deeply into the public consciousness that even people who knew there was no crime felt a nagging doubt.

On the other hand, when real scandals come rapid-fire, it's hard to integrate them and see the big picture.
@TimothyDSnyder Yes, exactly. The GOP democraphics are shrinking. That's why they're desperate. twitter.com/4AnimalLife/st…

That's also why my volunteer work this year is for voter protection groups.
@TimothyDSnyder Yes to this, too⤵️ twitter.com/TheOddPantry/s…
The "base" is willing to allow Trump and pals to cheat, and monopolize the hydrocarbon industry because there is something the base wants more than economic advancement: They want a hierarchy with white (Christians) at the top.
@TimothyDSnyder The "again" in MAGA signifies a return to the time when America was ruled by white (Christian) males.

This whole diversity thing and "equality for all" didn't really get started until after 1954 (Brown v Board) which is when the backlash started.

We're riding that backlash.
@TimothyDSnyder Someone commented on the irony of all the pedophiles and rapists in a party that purports to be about "Christian" values.

That's because it's really about a male-dominated hierarchy.

Rape and sexual harassment are means asserting patriarchal power ⤵️
twitter.com/Teri_Kanefield…
@TimothyDSnyder My threads are also blog posts. This one is here: terikanefield-blog.com/more-gop-russi…

My blog also has a search function and index.
@TimothyDSnyder But are members of any ethnic minorities in positions of power?twitter.com/somepplrk/stat…

White supremacy acknowledges the existence of other races, but envisions whites at the top of the hierarchy.