The Democrats have lots of first hand witnesses.

You can add Lev Parnas and John Bolton to the list if you want more.

I put together a list of crimes committed during the Ukraine caper.

I can't promise a comprehensive list. Who has that much time?

This one was included in the Impeachment Report to Accompany H. Res. 775 docs.house.gov/billsthisweek/… 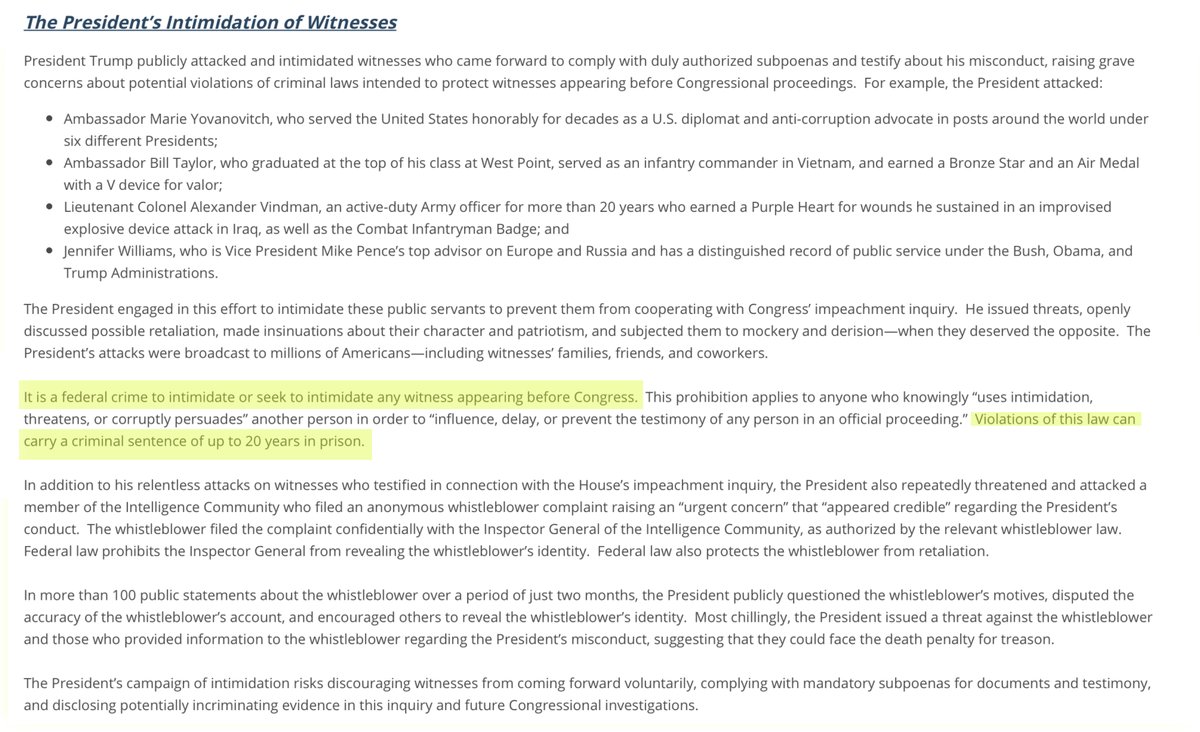 @RepMarkMeadows #2: Bribery: The report reminds us that it isn’t necessary for behavior to meet the elements of a statutory crime) and then explains that Trump’s behavior meets the elements of Criminal Bribery, 18 U.S.C. § 201.
law.cornell.edu/uscode/text/18…

Not a criminal violation, but are you OK with the President breaking laws?

This simply requires two or more people to commit an illegal act and take a step toward its completion.

The federal statute is here: uscode.house.gov/view.xhtml?pat…
@RepMarkMeadows #6: Obstruction of Justice

18 U.S.C. § 1503: An act that corruptly . . . influences, obstructs, or impedes, or endeavors to influence, obstruct, or impede, the due administration of justice.

law.cornell.edu/wex/obstructio…
@RepMarkMeadows #7: Obstruction of proceedings before departments, agencies, and committees

The illegal surveillance described by Lev Parnas is now the subject of an investigation in Ukraine . . .
nytimes.com/2020/01/16/wor…
. . . because Zelensky, an actual anti-corruption president, knows what to investigate and what not to investigate.
@RepMarkMeadows @just_security #11: The Hatch Act

The Hatch Act prohibits federal employees to use their titles to promote partisan politics.

Gary Stein, writing for @just_security, did a thorough job with that one.

justsecurity.org/67738/federal-…
@RepMarkMeadows @just_security #12: Misprison of Felony: Knowing someone committed a felony, and concealing that fact.

@AshaRangappa_ is the expert on this.

In asking for the announcement, Trump sought to hide the origins of the request. He wanted it to appear that Ukraine, on its own, investigated Biden.

Barbara McQuade, writing for @just_security, did an in-depth job with this one:

I won't summarize the expert witnesses who explained that impeachable offenses are abuses of power and not specific violations of the code. (There WAS NO federal criminal code in 1789)

Sometimes I think people who ask "where's the crime" are being disingenuous.
@RepMarkMeadows @just_security @AshaRangappa_ @TheViewFromLL2 Here is this thread as a blog post. terikanefield-blog.com/ukraine-caper-…

I see people using this thread to settle arguments. 🤣
Someone showed it to Dershowitz !
@RepMarkMeadows @just_security @AshaRangappa_ @TheViewFromLL2 Adding another crime, with a hat tip for this one to @JoyceWhiteVance

18 U.S. Code § 115: Influencing, impeding, or retaliating against a Federal official.