Mike Shellenberger
@ShellenbergerMD
1. This is the story of how natural gas companies & environmentalists have for 50 years used renewables to greenwash anti-nuclear advocacy & lock in fossil fuels to the detriment of the climate, and their consciences. twitter.com/shellenbergerm…
2. Everybody from @GretaThunberg to Green New Dealer @AOC says we have to transition from fossil fuels to renewables in order to save the climate.

But if solar and wind are substitutes for fossil fuels, why are the world’s biggest oil and gas firms promoting them?
3. Over the last three years, the five largest publicly-traded oil and gas companies, ExxonMobil, Royal Dutch Shell, Chevron, BP, and Total invested a whopping one billion dollars into advertising and lobbying for renewables and other climate-related ventures.
4. Their ad blitz has targeted the global elite in airports and on Twitter. “Natural gas is the perfect partner for renewables,” say airport ads run by Norwegian oil and gas giant Statoil. “See why #natgas is a natural partner for renewable power sources,” tweets @Shell
5. No sooner had I landed in Germany, for 2017 U.N. climate talks, when I was confronted by airport ads paid for by Total, the French oil and gas company reading, “Committed to Solar” and “Committed to Natural Gas.” 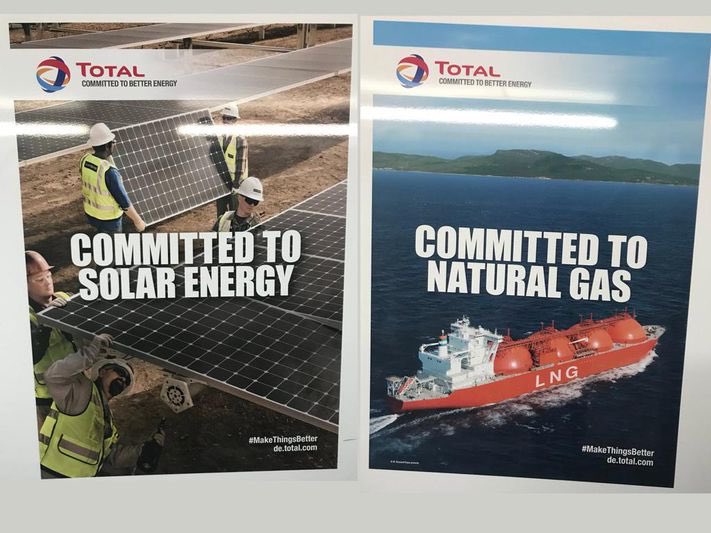 6. All of which raises the question: why, if renewable energy advocates are defenders of the climate, are they working with the oil and gas industry to replace zero-pollution nuclear plants with fossil fuels?
7. Why They Turned Against Clean Energy

In the 1950s and 1960s, conservationists were pro-nuclear. They understood that nuclear plants would produce pollution-free electricity on a tiny fraction of the land required for coal mining, hydro-electric dams, and oil and gas drilling.
8. At the time, California’s utilities were heavily regulated and had an obligation to the public to keep electricity prices low. They proposed to build nuclear plants to eliminate the state’s reliance on oil and natural gas.
9. In the mid-1960s, the Sierra Club supported the building of the Diablo Canyon nuclear plant to replace fossil fuels. “Nuclear power is one of the chief long-term hopes for conservation,” argued Sierra Club President Will Siri in 1966.
10. “Cheap energy in unlimited quantities is one of the chief factors allowing a large, rapidly growing population to set aside wildlands, open space and lands of high-scenic value,” added Siri, who was a biophysicist, mountaineer, and veteran of the Manhattan Project.
11. Not everyone thought cheap energy was a good thing. “If a doubling of the state’s population in the next 20 years is encouraged by providing the power resources for this growth,” said Club Executive Director, David Brower, California’s “scenic character will be destroyed.”
12. After weighing the arguments, the Sierra Club’s Board of Directors voted nine-to-one to support the building of Diablo Canyon.
13. In response, Brower quit and started a new group, Friends of the Earth (FOE). “There’s no more important issue in my life,” said Brower, than to “see that Friends of the Earth does everything it can, here and abroad, to stop the nuclear experiment.”
14. Would you be shocked to learn that the founding donor of FOE was oilman Robert Anderson, owner of Atlantic Richfield? He gave FOE the equivalent of $500,000 in 2019 dollars.
15. “What was David Brower doing accepting money from an oilman?” his biographer wondered. The answer is that he was developing the environmental movement’s strategy of promoting renewables as a way to greenwash the killing of nuclear plants and the expanded use of fossil fuels.
16. At the exact same time, California’s former gov, “Pat” Brown, was raising $100B from U.S. banks for Indonesia’s state oil company. In exchange, he received exclusive rights to sell Indo oil in Cali and a $360,000 donation to his son Jerry’s campaign for governor.
17. After he won, Gov. Jerry Brown’s aides took actions to defend the family’s oil monopoly. One of them, acting as air pollution regulator, killed a refinery being built by Chevron, which would have competed directly with the Brown oil business, another worked to kill nuclear.
18. By 1976, activists who feared that cheap nuclear energy would fuel overpopulation had taken over the Sierra Club. The organization’s new executive director proposed a strategy to foment hysteria about nuclear in order to impose regulations to make nuclear expensive.
19. “Our campaign stressing the hazards of nuclear power will supply a rationale for increasing regulation,” he explained, “add to the cost of the industry, and render its economics less attractive.”
20. Along with groups like Union of Concerned Scientists and NRDC, Sierra Club claimed that the clean if slightly warmer water that comes out of nuclear plants was a kind of “thermal pollution,” and demanded unnecessary and expensive measures to mitigate the non-problem.
21. Working together, Brown and the Sierra Club killed so many nuclear power plants between 1976 and 1979 that, had they been built, California would today be generating all of its electricity from zero-emissions sources.
22. Environmental Defense Fund also got its start in California in the 1960s. It created energy forecasts purporting to prove that California didn’t need nuclear because it could reduce electricity consumption.

California couldn’t, and expanded its use of natural gas, instead.
23. In the late 1980s, EDF made an alliance with Wall Street & natural gas to deregulate electricity markets. Along with the lack of nuclear, deregulation resulted in the 2000 energy crisis, which allowed gas investors to fleece California ratepayers out of billions of dollars.
24. NRDC advocated dereg & even helped gas giant Enron, distribute money to green groups. “On environmental stewardship, our experience is that you can trust Enron,” buzzed NRDC. Enron execs were defrauding investors of billions of dollars in an epic criminal conspiracy.
25. From 2009 to 2011, lobbyists with EDF and NRDC advocated for and helped write mind-bogglingly complex cap-and-trade climate legislation that would have created, and allowed its Wall Street donors to take advantage of, a carbon-trading market worth upwards of $1 trillion.
26. Today, EDF works with the world’s largest multinational oil and gas companies to demand changes to regulations in ways that benefit highly-capitalized firms and undercut smaller, less-capitalized competitors.
27. In recent years the work of hiding outlandish assumptions about renewables has fallen to Stanford’s @MarkZJacobson By simply entering numbers into an Excel spreadsheet, he managed to convince politicians, journalists, & activists that we can power the world on 100% renewables
28. What is the source of Jacobson’s funding? Why the Precourt Institute for Energy, founded by Jay Precourt, an oil and gas magnate and board member of Halliburton, the oil and gas services firm. The board of the Institute is a who’s who of oil, gas, and renewables investors
29. Today, the Sierra Club, EDF, and NRDC together take in more than half a billion dollars each year from donors that include billionaire coal, natural gas, and renewables investors like Tom Steyer and Michael Bloomberg.
30. Sierra Club and EDF have received a minimum of $136 million and $60 million, respectively, from oil, gas, & renewables investors, and are currently working alongside the American Petroleum Institute to kill nuclear plants in California, New York, Ohio and Pennsylvania.
31. NRDC, for its part, has a minimum of $70 million directly invested in oil and gas and renewable energy companies that stand to profit from the closure of nuclear plants. It, too, is working to kill nuclear plants in California, New York, Ohio, and Pennsylvania.
32. Even smaller groups, like WISE International and Environmental Law and Policy Center, take money from natural gas and renewables companies while fighting to replace nuclear plants with natural gas and renewables.
33. Friends of the Earth and Greenpeace — which rakes in $350 million annually, crashes drones into nuclear plants, and recently declared, “Sabotaging nuclear is a vital part of saving the climate” — both keep their donors secret.
34. EDF, NRDC, and Sierra Club know perfectly well that solar and wind require the expansion of fossil fuels. How could they not? They’ve been killing nuclear plants and watching air pollution rise, as a result, for a half-century.
35. Renewables advocates know that had California and Germany invested $680 billion into new nuclear power plants, instead of renewables and the grid upgrades they require, the two places would be generating 100% of their electricity from clean, zero-emission energy.
36. They know that Germany today spends nearly twice as much as France for electricity that produces ten times the emissions per unit of energy because France receives 75% of its electricity from nuclear while Germany is phasing nuclear out.
37. And they know that, after investing $33 billion over the last decade to add more solar and wind to the grid, France had to use less nuclear and more natural gas, resulting in higher electricity prices and more carbon-intensive electricity.
38. On Twitter, after I point these things out, someone will quip, “A lesson in unintended consequences.” But after 50 years of killing nuclear & promoting renewables, the main consequence of anti-nuclear advocacy — more fossil fuel pollution — can‘t be considered unintentional.
39. What about climate activists like AOC and Thunberg? Are they aware of the extent to which their renewable energy advocacy is a far more valuable form of natural gas greenwashing than any amount of Twitter and airport advertising? If they aren’t, they should be.
40. Thunberg and AOC are right that we have a moral obligation to do the right thing on climate change. Unfortunately, neither of them does.